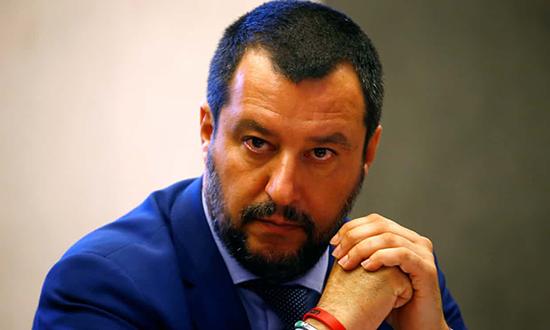 The Italian interior minister has been linked to Russian money. It’s just the latest crisis he’s brushing off.

ROME—The scoop from BuzzFeed News was a huge one: audio recordings in which a close associate of Matteo Salvini, Italy’s interior minister and the country’s most powerful politician, is heard negotiating a complex energy deal with Russian interlocutors that would route funds to Salvini’s right-wing populist League party ahead of European Parliament elections. “A new Europe has to be close to Russia as before because we want to have our sovereignty,” Salvini’s associate is heard saying.

There’s no evidence that the deal, which would have violated Italian campaign-finance law, ever happened. But that’s hardly the point. The audio showed incontrovertible if shadowy aspects of Russian reach into European politics and raised questions about business dealings in the sottobosco, or undergrowth, of the League. (It built on an earlier report of the meeting that appeared in February in the Italian center-left weekly L’Espresso.)

Neither Salvini nor his associate responded to questions from BuzzFeed or L’Espresso, but Salvini, who has long expressed his deep admiration for Vladimir Putin, said his party had never taken “a ruble” from Russia. The associate downplayed the meeting in Italian media, adding that he had not done anything illegal and anyway, the money hadn’t arrived. He hinted that the leak of the audio might be the result of a power struggle between spies, noting that it appeared a week after Putin had visited Rome.

In another country, and another moment, such damning allegations might have brought down a government, as happened recently in Austria. In Italy, they have done no such thing. The BuzzFeed report could weaken Salvini in the long term, but in the short term it might actually strengthen the current government—an uncomfortable coalition of the League and the anti-establishment Five Star Movement—by delaying the prospect of early elections, and bolster Salvini by showing his political agility.

In elections for the European Parliament in May, which are a gauge of national voter sentiment, Salvini’s League doubled its percentage of the vote compared with its showing in national elections last year, while the Five Star Movement’s standing shrank. This opened the tense prospect of early elections, which the League might have won with a solid-enough majority to govern on its own.

After the BuzzFeed scoop—and with Italy’s economy in dire shape, forecast to have the lowest growth rate in the European Union this year—it’s no longer in Salvini’s immediate interest to bring down the government in the hope of securing a majority in a new vote. Instead, he turned to his social-media feeds, which have become a powerful arm of government and a way of connecting with voters, and pulled a classic maneuver: When under fire, play the victim.

On Thursday, Salvini tweeted about stray dogs left behind at a center for asylum seekers after the government shut the center down. (He said the dogs needed adopting, and has generally shown more empathy for the dogs than for the asylum seekers.) He tweeted a picture of himself after a vote reducing the number of Italian members of Parliament. And he posted an 18-minute handheld video on Facebook in which he conflated the BuzzFeed report with an unrelated incident in which someone had sent a .22-caliber bullet in the mail to him, addressed to “il Duce Salvini,” the term used for Mussolini.

“Waking up with a bullet aimed at you isn’t the best way to wake up,” Salvini said. He also mentioned the bullet when he addressed the Italian Senate on Thursday in a debate about immigration. Never mind that he is the most powerful politician in Italy—in his telling, really, he’s the one under attack.

Here he has some allies. The president of the Italian Senate, Maria Elisabetta Alberti Casellati, who is from former Prime Minister Silvio Berlusconi’s Forza Italia party, dismissed the report as “journalistic gossip.” Yet Salvini also has some critics. The center-left opposition and two previous center-left prime ministers have called for a parliamentary inquiry into the BuzzFeed report. The Milan prosecutor’s office said it had opened a judicial investigation into the allegations reported by BuzzFeed, as well as those in the earlier story in L’Espresso.

And here we have a déjà vu moment. If the Berlusconi era teaches anything, it’s that citizens struggle to keep track of confusing facts, details, and legal sagas, and tend to vote out of loyalty. Berlusconi, who for a long time was also untouchable, spent years attacking magistrates he said were on a witch hunt against him.

Salvini is proving equally adept at this, and he does so as a minority member of a coalition government in which he has all the power without all the responsibility. If you were with Salvini before, you’ll probably still be with him, no matter what his associates were up to last October in Moscow’s Metropol Hotel. If you were against him, your reasons keep multiplying. And he will continue to deflect them, borrowing a line from Mussolini: “More enemies, more honor.”