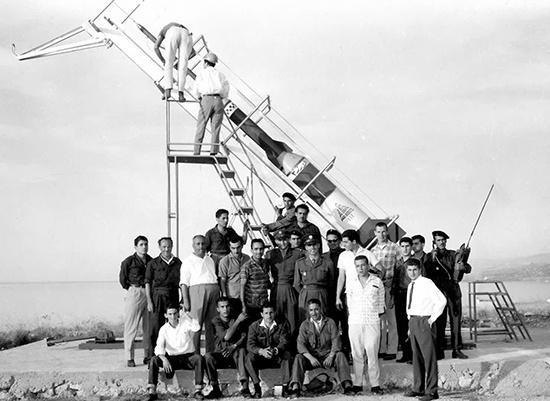 This is not a tale, but Lebanon’s great historical achievement.

BEIRUT: Let’s go back in time, to one of the most notable achievements in Lebanese history marked by The Lebanese Rocket Society during the early 1960s.

At the time, Manoug Manougian, a mathematics professor at the Hagazian University led a group of young scientists, students and army experts to develop an infant space program for their country and launched the first Middle-Eastern rocket.

As Manougian mentions, the mission that he was leading along with his students was purely a scientific project and had nothing to do with military usage. The aim was to be on the journey for space discovery, along with other great space agencies like NASA.

The school science club named the project the Hagazian College Rocket Society, which was later changed to the Lebanese Rocket Society as the endeavor soared in national popularity and pride.

At one point in the 60s, the Lebanese Postal Service even produced a commemorative stamp, the originals of which are now difficult to find.

“After the launching of Sputnik, the world’s first satellite launched by the Soviet Union, we as students of science were all motivated to know how a rocket works,” Khalil Bitar, a physics professor at the American University of Beirut who was only 19 when he joined the society, told Annahar.

He added: “We all worked together to fulfill our curiosity, those were the golden days.”

It started only with Manougian and his students, but after becoming the first rocket made in the Middle East, the army and the Lebanese government got involved to ensure safety.

With a startup budget of 750 Lebanese pounds donated by the late deputy Emile Bustani, the members of the HCRS: Simon Aprahamian, Garabed Basmadjian, Hampartsum Karageuzian, Hrair Kelechian, Michael Ladah, and John Tilkian, set out on their scientific adventure to prepare single and multi-stage solid-fuel rockets.

“Here was tiny Lebanon, able to do what the rest of the Arab world hadn’t done,” Manougian recounted to BBC reporter Richard Hooper. “We were young kids, in our early 20s, doing something incredible,” he added.

The Lebanese government subsequently funded the project with the amount of the then princely sum of 12,000 Lebanese Pounds in 1963, and the same amount in 1964.

The project was not in regional favor as there were concerns after the rocket Cedar 4 flew at a distance of 145km, and was not believed to still be just a science project.

Also after an explosion that took place on July 21, 1964 that blew up at the Hagazian university and caused many injuries, the society became inactive. Soon afterward, President Fuad Chehab asked them to stop.

After that, the project was dropped.. For some it became fiction, a tall tale, to be told in passing.

To commemorate this event, directors Joana Hadjithomas and Khalil Joreige made a documentary titled “The Lebanese Rocket Society,” which was released in 2013, featuring many of the principal persons involved, including Manougian.

The documentary also featured original photographs that were shot during the early 60s advent of the program – which helped further bring the story to life.

The Doha Film Institute noted in its synopsis of the film: “When filmmakers Joana Hadjithomas and Khalil Joreige inadvertently discovered that their native Lebanon launched the first rocket in the Middle East in the 60s … they were surprised and intrigued.”

Both filmmakers were born in 1969 and met as young film students at the Paris Nanterre arts school.

As a tribute to all the effort that went into the rocket project, they had a life-size replica of the Cedar 4 placed on a platform in the Hagazian University, as a lasting testament to Manougian and his club. It also stands as a reminder that this is not a tale, but Lebanon’s great historical achievement.

“It isn’t nostalgia; we should take what inspires us from the past and use it for the future, ” filmmaker Joana Hadjithomas said, adding: “Dreaming of the same thing together, we can change so much.”