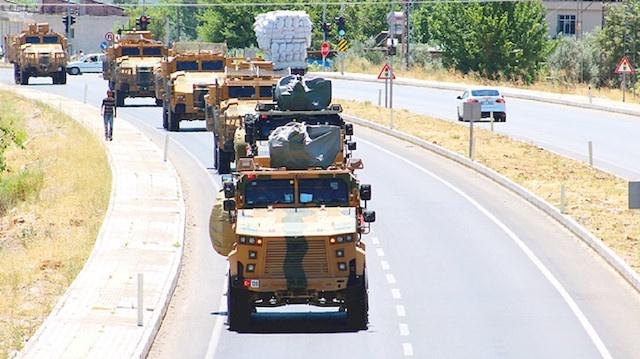 According to Yeni Şafak daily’s local sources in the region, U.S. officials told PKK ringleaders that multinational peacekeeping forces will be stationed in Syria’s east and northern regions.

Turkey placed its forces stationed across the border from Syria on red-alert on Thursday following a series of covert Gulf and U.S.-sponsored “terror meetings” which were held with Kurdistan Workers’ Party (PKK) terrorists in northern Syria.

Over 50 tanks and artillery batteries were deployed to regions in southern Turkey, across from the Kurdistan Workers’ Party (PKK)-occupied regions of Tal Abyad and Ras al-Ayn. Meanwhile, unit commanders and Free Syrian Army (FSA) leaders were called in for a meeting in Ankara, which had recalled to duty all units that were placed on leave.

Turkey had already summoned anti-aircraft missiles, armored ambulances and fuel tanks to the frontline in the southern province of Hatay.

Additionally, all FSA units were placed on high alert in both the northern Syrian cities of al-Bab and Jarabulus.

Among those who participated in the “terror occupation” meeting were tribal members and representatives of civil society.

Turkey had repeatedly stressed that it will not allow the formation of a terrorist corridor along its southern border with Syria, and towards that end has promised a counter-terrorist operation east of the Euphrates in Syria.

US gives terror group its word: No Turkish forces in safe zone

As Washington continues its arms and munitions shipments to the PKK terror group, it has sped-up its comprehensive plans for Syria’s northeast.

The U.S. is now conducting meetings for the “safe zone” set to be established in Syria, with its anti-Daesh Coalition Special Representative William Roebuck and U.S. President Donald Trump’s Special Syria Representative James Jeffery sitting down for special meetings with so-called PKK officials such as Shahin Cilo, Elder Halil and Ilham Ahmad.

During said meetings, the U.S. is said to have vowed to not include any Turkish soldiers in the planned safe zone, which it also promised won’t be “deeper than six kilometers into the border.”

According to Yeni Şafak daily’s local sources in the region, U.S. officials told PKK ringleaders that multinational peacekeeping forces will be stationed in Syria’s east and northern regions. They reportedly said that the force will be made up of 15,000 soldiers during the first phase, claiming that Turkish forces “will be part of this force.”

However, they claimed Turkish soldiers will not be deployed along Turkey’s 570-kilometer-long border with Syria, instead they will be sent to Syria’s southern Tanaf, Mayadeen, Alboukamal and Badiyah regions where Daesh and Iran-backed Shia militias are located.

Preparations for a federal council

After partnering with the Damascus regime during the first years of Syria’s civil war, the PKK terror group became the U.S.’s regional partner as of 2015.

The Pentagon sent the terror group arms and munitions shipments under the pretext of the fight against Daesh, and despite the latter being defeated after losing it latest stronghold in the countryside of Deir Ezzor, U.S. arms shipments to the PKK not only showed no signs of stopping, but also seem to be gaining momentum.

The rate of high-ranking visits by officials from U.S., EU and Gulf countries to the region has also increased exponentially.

U.S. Secretary of State Representative Joel M. Rubin had met with PKK ringleaders in Hasakah and Raqqa, where he informed them that local councils in te region will be turned into a “Federal Council” along with a regional military council that closely resemles the ranking hierarchy of the U.S. Army.

Syria has been locked in a vicious civil war since early 2011, when the Assad regime cracked down on pro-democracy protests.

Since then, hundreds of thousands of people have been killed and more than 10 million displaced, according to UN officials.

The PKK — listed as a terrorist organization by Turkey, the U.S. and the EU — has waged a terror campaign against Turkey for more than 30 years, resulting in the deaths of nearly 40,000 people.

The YPG, the PKK’s Syrian branch, has managed to occupy one-third of Syria under the guise of fighting Daesh with U.S. support.

Since 2016, Turkey’s Euphrates Shield and Olive Branch operations liberated Syrian border regions of YPG/PKK and Daesh terrorists, allowing hundreds of thousands of displaced civilians to return to their homes.