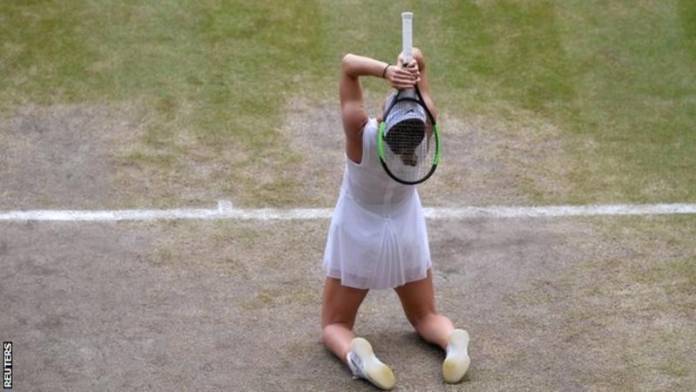 By Sonia Oxley-BBC Sport at Wimbledon

The Romanian won 6-2 6-2 in front of an incredulous Centre Court, running after everything the American threw at her.

“It was my best match,” the 27-year-old said after her second Grand Slam title following her 2018 French Open success.

For 37-year-old Williams, it was a third major final defeat in 12 months.

“She played out of her mind, it was a little bit deer in the headlights for me,” Williams said.

Halep shows no nerves as expectation weighs on Williams

Williams, like in last year’s final defeat by Angelique Kerber, seemed weighed down by public and personal expectations as she quickly fell 4-0 behind in the opening set.

Halep had said beforehand that she had no pressure on her and she that is exactly how she played.

From the outset she looked relaxed and confident, attacking the Williams serve and keeping the rallies long and deep to force the American into errors.

While Williams closed her eyes at changeovers to try to regroup, Halep kept her eyes on the prize and kept her cool to take the victory on her second match point when the American sent a forehand into the net.

Halep’s level never dropped in an almost perfect display where she made just three unforced errors to Williams’ 26.

Halep sticks to the perfect gameplan

Seventh seed Halep, in her first major final since winning the French Open last year and having lost her world number one ranking, flew under the radar at these championships while much of the focus was on Williams and her record chase.

But she executed the perfect gameplan – stifling Williams’ biggest weapon in her serve – and it was credit to her returning ability that Halep restricted the American to just two aces when she had fired 45 during her other matches.

Halep’s movement around the court contrasted with a sluggish Williams – who at one point was urged to “wake up” by one shout from the crowd – and her tenacity in the rallies forced the American to overcook her shots through what felt like desperation at times.

A break in the first game set the tone, with Williams firing wide before a Halep hold to love underlined her determination to win. The net helped Halep in the next game, with her shot scraping over but Williams’ return bouncing back at the American.

With just 11 minutes on the clock Halep had won the first four games and she barely slowed down, facing just one break point – which she saved.

Williams started to get herself a bit more into the match early in the second set but when she came to the net for a volley with the whole court at her disposal and only managed to find the net, giving Halep the break, she must have known it was not going to be her day.

Halep then won the next three games in a row, falling to her knees with her arms raised to the sky in celebration as Centre Court rose to is feet in appreciation of one of the greatest Wimbledon final performances.

BBC tennis correspondent Russell Fuller: “At the start of the second set you could see that Simona Halep was still that bit better, actually a lot better. I don’t think anyone is going to feel short-changed by the 56 minutes of tennis that they have seen today because they have seen one of the all time great Wimbledon final performances.”

Two-time Grand Slam champion Tracy Austin on BBC TV: “Unbelievable tennis from Simona Halep. She put herself in such a bubble mentally and she didn’t let herself begin to think about the end of the match. She said this was a chill year. She really took the pressure off herself.”

Three-time Wimbledon singles champion John McEnroe: “I’m shocked. She obviously is a tremendous and, at this stage in her career, superior athlete. But I didn’t think it would intimidate Serena Williams as much as it did today. Halep completely and thoroughly outplayed her. It wasn’t even a match. There’s only a handful of times in your life when you feel as though you’re in the zone like that and that was one of them.”

Nine-time Wimbledon singles champion Martina Navratilova: “I think it’s essential for Serena Williams to play more matches. You can’t fake it. You need those matches. History can get in the way, and it can get difficult to get rid of those nerves.”