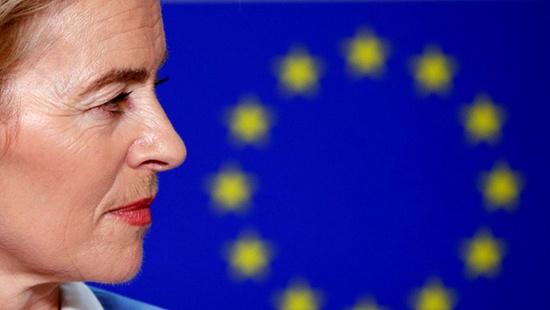 Until recently, Ursula von der Leyen was largely unknown in Brussels. Now the German defense minister needs to win over a majority of the EU Parliament to secure the presidency of the European Commission. She remains an enigma to many, but is hoping some high-profile advisers can help change that.

Ursula von der Leyen, who is currently being shielded from journalists like a pop star from groupies, is taking a break in front of the International Press Center in Brussel’s European Quarter. She repeatedly throws her arms around. “Now I need a bit of movement,” she says.

It is shortly before midnight on Tuesday, and the aspiring president of the European Commission, the European Union’s executive, is on her way to her hotel after many hours at her desk and phone. It is cold this late in the evening, and the center-right Christian Democrat (CDU) politician is wearing only a pink cardigan. But the cold doesn’t seem to bother her. Von der Leyen is bursting with energy, and gushes about her new job: The young people working for the transition team, the languages, the international surroundings.

After her years at the head of the stiff and scandal-plagued German Defense Ministry in Berlin, von der Leyen seems like she has been liberated. In her steep political ascent, she was often protected by people at the very top, but now she has to fight for herself, and conduct a campaign on her own — or almost alone, given the small, occasionally colorful flock of advisers at her side.

On Tuesday, the European Parliament is set to vote on whether von der Leyen should become Commission president. The ballot is secret. Von der Leyen needs 374 of the current 747 lawmakers, and these need to include votes from the correct camps, from the conservatives in the European People’s Party, the social democrats and the liberals. The Greens have already rejected her.

If she is only able to clear this decisive hurdle with the help of Poland’s Law and Justice (PiS) party or Spain’s right-wing populist Vox party, she would be starting her job with heavy baggage. People would quickly come to believe that von der Leyen only became the head of the EU with the help of two countries, Hungary and Poland, that have been trampling on rule of law in recent years. The last thing von der Leyen needs in launching her term — whose beginnings have already been tumultuous — is a reputation as a Commission head who is at the mercy of Hungarian Prime Minister Viktor Orbán or the likes of him.

But it is proving difficult for von der Leyen to establish a majority among the pro-European parties. The defense minister only knows Brussels politics from a NATO perspective and, at the same time, is an unknown quantity to many members of the European Parliament. She was hardly seen during the election campaign, and nobody knows what policies she has in mind for Europe. She is starting from scratch in Brussels.

On Wednesday afternoon, von der Leyen could be seen standing at a podium on the ground floor of the European Parliament, placing several papers next to one another. She announced a few of key plans she would like to implement in the next few years — a scaled down right for the European Parliament to initiate legislation (currently the sole domain of the European Commission) and a minimum wage for every EU country. When she isn’t saying things like, “We have to take the people along,” she is often reading from prepared statements.

It is uncharacteristically cautious behavior for a woman who fearlessly pushed her entire party forward in Germany on issues like daycare expansion and quotas for women in management and on executive boards as a family minister back at home. But she doesn’t want to make any mistakes right now — at least, as long as her candidacy has not yet been confirmed. The energy she showed during her walk the previous evening is nowhere to be seen during these appearances.

Though von der Leyen’s recommendations are a pretty good reflection of the overlaps between the biggest groups in the European Parliament. When it comes to climate protection, she is pushing her own people to take on more ambitious goals, and the idea of staffing the Commission half with women is popular not only among people on the left.

But what’s missing is trust. Many lawmakers would like it if von der Leyen’s promises were anchored in an agreement between the European Parliament and the Commission, but there isn’t enough time for that. A tweet by a conservative member of parliament claiming von der Leyen wants more restraint in the punishment of politicians who violate the rule of law was enough to sustainably darken the atmosphere in her conversation with the Greens and liberals.

As Commission president, she would have around 35,000 employees. But as a candidate, she can only lean on a handful of advisers — and not everyone has been helpful. Von der Leyen has turned to a man who is himself fighting to keep his job: Martin Selmayr. The German lawyer, who is currently still the secretary general of the European Commission, is partly responsible for the transition and a constant visitor to von der Leyen. On Tuesday, he could be seen scurrying across the street near her offices, where only a few trusted figures are headquartered.

Her transition includes Jens Flosdorff, her longtime spokesperson and crisis manager, as well as her chief of staff, Björn Seibert. Both are close confidantes, having survived many crises in the Defense Ministry at von der Leyen’s side. But they both need to get used to the complex terrain in Brussels.

The minister’s pro-European agenda was always a solo project. At best, the head of her political department, Géza Andreas von Geyr, was also on board. He is also currently packing his suitcases in Berlin — not to help von der Leyen in Brussels, but to become Germany’s ambassador to Moscow.

In the stead of the subtle diplomat, Selmayr is currently trying to successfully carve out a position for von der Leyen. Her late-night visitor is seen as manipulative and tough as nails. Selmayr was Jean-Claude Juncker’s head of cabinet until he become Secretary General of the European Commission in March 2018 under dubious circumstances. His ascent has been marred by the fact that he got promoted twice within a matter of minutes into his desired job. So, it’s no wonder the Greens wanted to know during their visit with von der Leyen what her position is vis-à-vis Selmayr. The candidate said she would not discuss staffing issues publicly.

The concerns about Selmayr, however, are justified. To stay on top of the situation, he has already added several allies to von der Leyen’s “transition team.” Pauline Rouch worked with Selmayr on the staff of former EU Justice Commissioner Viviane Reding, an ally of von der Leyen’s in the fight for a woman’s quota.

If von der Leyen decides to keep her fellow German, it would be a remarkable miscalculation for a woman who otherwise doesn’t leave anything to chance. From her time in the Defense Ministry, she knows the public anger at politicians who don’t seem to play by the rules. That’s why Flosdorff was given temporary leave from the Defense Ministry so he could help in Brussels. And von der Leyen is commuting between Berlin and the EU capital not with a jet belonging to the German Air Force, but rather a charter plane paid for by the European People’s Party.

Von der Leyen has also managed, for the first time, to establish a sleek presence on social media. Before, her aide occasionally took photos with an iPhone that were then posted alongside somewhat clumsy text on Instagram.

But it quickly became clear that this wouldn’t suffice for a top job in the EU. As a result, the minister followed up on an offer the agency Story Machine had made several months earlier. The new agency, founded by former Bild tabloid editor Kai Diekmann and two friends, fulfills the online dreams of prominent decisionmakers.

When she was just a minister, von der Leyen had rejected the offer. She couldn’t afford any more headlines about external consultants. But when the call from Brussels came, she didn’t hesitate for long. The day after the nomination, Story Machine got to work. It created the @vonderleyen Twitter handle, and immediately greeted the world in three languages.

The involvement has paid off. Instead of the amateur photos, the candidate now presents herself on Twitter with a visually appealing gif of her walking into her transition office, posted in German, English and French. In one week, she reached over 60,000 followers. The pitch worked.

Von der Leyen’s Europe learning curve has also been turning upwards. About ten days ago, she visibly treaded water when asked about EU topics by the handpicked guests in the wood-paneled Journalist’s Club of the corporate headquarters of media conglomerate Axel Springer in Berlin.

Guests remember the candidate as brimming with enthusiasm for Europe. Attendees included former SPD head Sigmar Gabriel, perennial great CDU hope Friedrich Merz, and former Austrian Chancellor Sebastian Kurz. During her short visit, the vocabulary preferred by pro-Europeans reverberated in the room: rule of law, freedom, peace. But when it came to her concrete plans for the EU, the guests learned nothing.

Now von der Leyen needs to convince the parliamentarians that she is at least as well-suited for the job as the elected leading candidates, who were campaigning on the idea that the winner had a chance of becoming the next European Commissioner, but who were then sidelined by the leaders of the EU member states after the election.

Von der Leyen also likes to ask defeated politician Manfred Weber, of the CDU’s Bavarian sister party, the CSU, for advice. Weber ran as the conservatives’ leading candidate in the European election. He patiently explained to her, to the point of self-denial, the red lines of his own parliamentary group. He only communicates his displeasure to a close group of associates. “Aside from defense-related subjects, von der Leyen knows little about Europe,” he told them. And to think, he was criticized for not having enough experience?

Von der Leyen has even fewer friends among the German Social Democrats, and her attempts to sweet-talk them has had limited success. “I know Ursula von der Leyen well and like her personally,” says Katarina Barley. The SPD’s leading candidate in the European election sat next to von der Leyen in the cabinet bench in the Bundestag, as the German parliament is known. “But Parliament must now show that it will not allow itself to be bypassed in this way.”