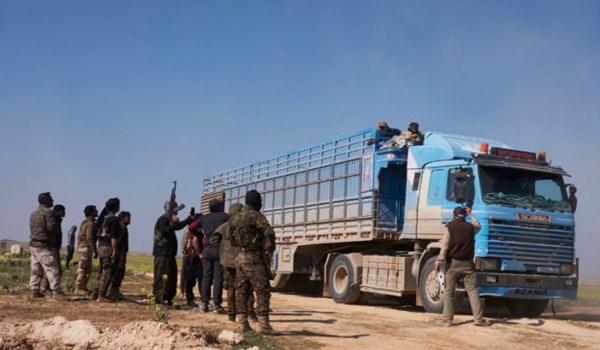 TEHRAN (FNA)- Tens of ISIL terrorists have been transferred from Turkey to Afrin region in Northwestern Aleppo as reports said the Turkish Army and its affiliated militants are preparing to launch a major offensive on the US-backed Kurdish fighters in Eastern Euphrates.

The Kurdish-language Hawar News Website quoted local sources in Afrin as saying the ISIL terrorists have become active along Turkey’s borders with al-Shieh region in Afrin.

Hawar noted that thousands of Turkey-backed terrorists have recently been dispatched to Afrin from Idlib province.

The well-trained ISIL terrorists are being dispatched to Afrin by Ankara as the Turkish Army is preparing for dispatch massive military equipment to borders with Syria to launch a major operation against the Kurdish militias in Northeastern Syria.

In a relevant development earlier on Sunday, the Arabic-language media outlets reported that the Turkish Army has equipped the terrorist groups with state-of-the-art weapons which were also used by the militants in their recent failed attack in Northern Syria.

The Arabic-language al-Watan newspaper noted that the terrorists have used the advanced weapons they have just received from Turkey in their recent foiled attack on the Syrian Army’s military positions in the town of al-Hamamiat and its strategic hilltop.

The daily said that the strategic hilltop is located along Saqilbieh-Mahradeh Road in Northern Hama, adding that the Turkish Army has dispatched well-trained foreign and Arab terrorists, who have been equipped with highly-advanced weapons together with anti-Tank weapons, to confront the Syrian Army in Northern Syria.

The newspaper pointed to Ankara’s defeat in the most difficult battle to take back the region, and said that the Syrian Army troops have heightened security in al-Hamamiat town as fierce clashes with Tahrir al-Sham al-Hay’at (the Levant Liberation Board or the Al-Nusra Front) terrorists are still underway there.

The Syrian Army’s air and ground forces, meantime, pounded the terrorists’ military positions in the town of al-Sarmanieh in Sahl al-Ghab in Western Hama, killing a number of terrorists, including their senior commander, Mohammad Fazel Ali Barbouri.

The Syrian airstrikes and ground offensives came in response to the terrorists’ rocket attacks on the Syrian Army’s military points and residential areas in the towns of Hayalin, Ain Salimu and Jourin in Northern Hama.

In Southern Idlib, meantime, the Syrian Air Force also pounded the military positions and movements of the terrorists in the town of Khan Sheikhoun, Maret al-Numan, Ariha, outskirts of Khan al-Sabal and Rab al-Jour, destroying a training camp of Tahrir al-Sham near al-Hamedieh and killing all the terrorists inside the base.