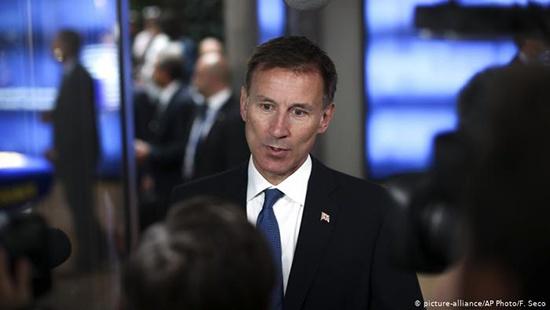 DW – EU foreign ministers meeting in Brussels are hoping to deescalate tensions between the US and Iran. Britain’s top diplomat says there’s still a “small window” of time to keep the 2015 nuclear deal alive.

British Foreign Secretary Jeremy Hunt voiced optimism on Monday that the diplomatic impasse over the Iran nuclear deal could be resolved.

“Iran is still a good year away from developing a nuclear bomb,” allowing a “small window to keep the deal alive,” Hunt told reporters as he arrived for talks with EU foreign ministers in Brussels.

The meeting in the Belgian capital aims to come up with a plan to defuse tensions between Tehran and Washington and salvage the embattled nuclear deal Iran signed with world powers in 2015.

A ‘way out’ for Iran

Under the deal, Iran agreed to curb its atomic nuclear program in return for relief from crippling sanctions. But the US’ decision to withdraw from the pact last year and reimpose sanctions has sparked fears among European signatories — namely France, Germany and Britain — that the accord could collapse altogether.

Things escalated in recent weeks, after Iran said it would increase its stockpile of low-enriched uranium and enrich uranium beyond the limits set by the deal.

“What we’re looking for is to give Iran a way out of this so that they can get back into compliance with that nuclear deal,” Hunt said, adding that the pact was still “the best way of keeping the Middle East as a whole nuclear weapon free.”

When asked if European states would punish Iran for breaching the deal, he said a joint commission would look into the issue “very soon.”

Dutch Foreign Minister Stef Blok said that “it is still not too late, but Iran really has to stick to its obligations.”

Getting around US sanctions

Iran has threatened to abandon its nuclear commitments unless European countries do more to help its sanction-hit economy. In a statement on Monday, Iran’s Foreign Ministry urged European parties “to take practical, effective and responsible decisions” to save the agreement.

“Any expectation for Iran to return to the conditions prior to May 8, 2019 without proof of any political will and practical ability of the European parties” to ensure sanctions relief “is an unrealistic expectation,” the ministry said.

EU ministers in Brussels were also expected to discuss INSTEX, a barter-like system allowing countries to trade with Iran and cushion it from the impact of Washington’s sanctions. Ten countries have signed up for the scheme so far.

“We want to uphold our part of the agreement,” said Germany’s deputy foreign minister, Michael Roth, as he arrived at the meeting. But he added that Iran could only expect better economic ties to the outside world if it stuck to its obligations.

INSTEX “makes economic cooperation possible, but it is necessary for Iran to keep to the commitments it made. It must stay true to the agreement, otherwise this all makes no sense,” Roth said.

Iranian President Hassan Rouhani on Sunday reiterated that Tehran was willing to negotiate on the condition that the US lifted sanctions and returned to the nuclear deal. But US President Donald Trump has shown no sign of changing tack.