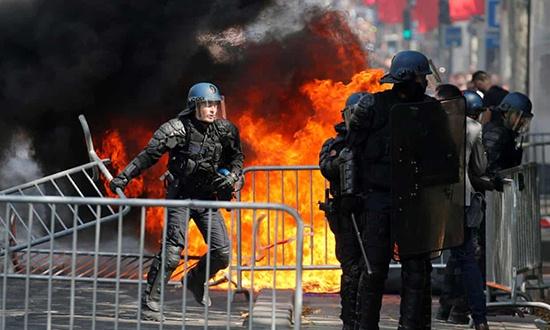 Angelique Chrisafis in Paris – The Guardian

A few dozen men — some masked and dressed in black — briefly tried to block roads near the Arc de Triomphe by dragging metal security barriers and setting fire to bins.

The skirmishes were over quickly but they marked the worst clashes between riot police and masked demonstrators in central Paris since March. The men involved were not wearing the signature yellow vests of the anti-government gilets jaunes protests of the past eight months.

As police rushed into the streets around the Champs Elysées, shoppers and tourists were seen fleeing from the teargas. Riot police cleared the roads and took up position on main streets and calm was restored.

Earlier on Sunday morning, before the traditional annual military parade, some 152 people – including yellow vest protesters – were arrested as they tried to stage a separate demonstration.

Among those stopped by police and briefly taken into custody were Jérôme Rodrigues and Maxime Nicolle. The two men are key figures from the gilets jaunes protest movement, which began as a revolt against fuel tax in November 2018 and has continued as an anti-government protest. Although there has been a decline in the number of people taking part in the weekly gilets jaunes Saturday marches in French towns, the movement is still active. Rodrigues’s lawyer, Arié Alimi, told AFP his being stopped by police amounted to “arresting political opponents”.

Security was tight for the 14 July national day which commemorates the 1789 storming of the Bastille fortress in Paris during the French Revolution.

No one with a yellow vest had been allowed past police barriers to watch the parade. A few had slipped into the crowd and instead inflated yellow balloons. Some had booed and jeered the French president Emmanuel Macron as he travelled down the Champs Élysées in an open-topped military vehicle.