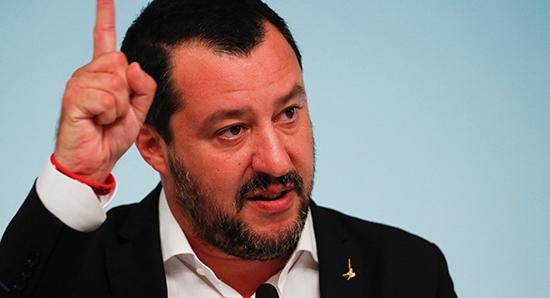 Prime Minister Giuseppe Conte said in a statement that Salvini’s office had invited Gianluca Savoini, a Salvini ally at the center of the flap, to a dinner with Russian President Vladimir Putin in Rome. Salvini had previously said that he hadn’t invited him and didn’t know why Savoini was at the July 4 dinner.

Savoini, who is president of the Lombardy Russia association, had previously met in Moscow with three unidentified Russians to discuss ways to finance the League, Buzzfeed News reported on July 10, citing a secret audio recording. Milan prosecutors have opened a preliminary investigation into possible Russian funds paid to the League, Ansa reported July 11.

Salvini, who also serves as interior minister, has denied his party received any Russian financing. In a statement last week, the deputy prime minister said he has “never taken a ruble, a euro, a dollar or a liter of vodka in financing from Russia.”

The revelations have added to tensions between the League and its partner in the governing coalition, the anti-corruption Five Star Movement. It’s too soon to say whether the reports have dented Salvini’s popularity at a time when many of his allies are pushing for him to break with Five Star and seek early elections. Support for the League climbed to 38 percent in a poll this month, within shooting distance of the 40 percent threshold that could give the League a majority in the parliament.

After Conte’s note, former Prime Minister Paolo Gentiloni called for Salvini to resign. “Someone who tells lies to cover fraud can’t be the interior minister of a big democratic country,” Gentiloni, a leader of the opposition Democratic Party wrote in a Twitter post.