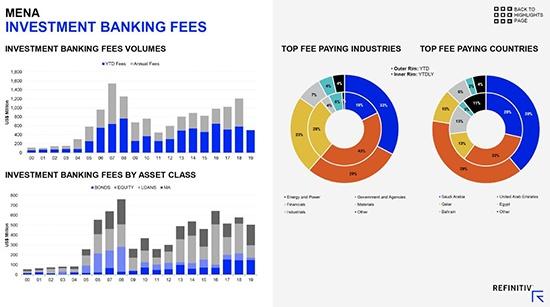 According to the report, Middle Eastern & North African investment banking fees totalled an estimated US$504.8 Million so far during 2019, 12.7% less than the value of fees recorded during the first half of 2018. Debt capital markets underwriting fees totalled US$147.6 million, up 1.7% year-on-year the second highest fee volume for the region since our records began in 2000.

Syndicated lending fees accounted for 24.9% while the share of completed M&A advisory fees raised to the highest YTD level on record, accounting for 41.1% of the market. Equity capital markets underwriting fees accounted for 4.8%, a 10-year low. HSBC earned the most investment banking fees in the Middle East & North Africa so far during 2019, a total of US$65.8 million for a 13% share of the total fee pool.

As to Mergers and Acquisitions (M&A), driven by state-owned ARAMCO’s US$69.1 billion acquisition of SABIC, the value of announced M&A transactions with any Middle Eastern & North African involvement at an all-time high reaching US$112 billion in the first half of 2019, 231% more than the value recorded during YTD 2018. Additionally, both Middle Eastern and North African target and Inter-MENA/Domestic transactions currently stand at all-time highs rising to US$101.2 billion and US$86.1 billion, up 375% and 699% from YTD 2018, respectively.

While MENA inbound M&A also stands at a YTD all-time high of US$15.1 billion, outbound M&A decreased from US$6.5 billion in YTD 2018 to US$4.6 billion so far during 2019, the lowest volume since YTD 2004. Energy & Power deals currently account for 80% of Middle Eastern and North African involvement M&A by value, followed by the financial sector with a 13.7% market share but counting with 44 transactions, 18 more than the 26 recorded in the Energy & Power industry.

As to Equity Capital Markets, Middle Eastern and North African equity and equity-related issuance totalled US$1.1 billion so far during 2019, a 73% decrease year-on-year to the lowest level since YTD 2004. With US$923.2 million, IPOs represent 88% of the region’s ECM issuance, up from 16% during YTD last year. Arabian Centres Co Ltd IPO raised US$658.6 million and stands out as the biggest deal so far this year.

Despite showing a 12% decreased compared to YTD 2018, debt issuance in the Middle Eastern and North African region currently stands at the third highest level since our records began, reaching US$53.1 billion so far this year. Saudi Arabia was the most active nation in the region accounting for 40.5% of activity by value, followed by the Qatar with 29.6% while Governments and Agencies account for 48.3% of issuance so far this year.

For a full copy of the report, please click MENA IB Review Q219.pdf