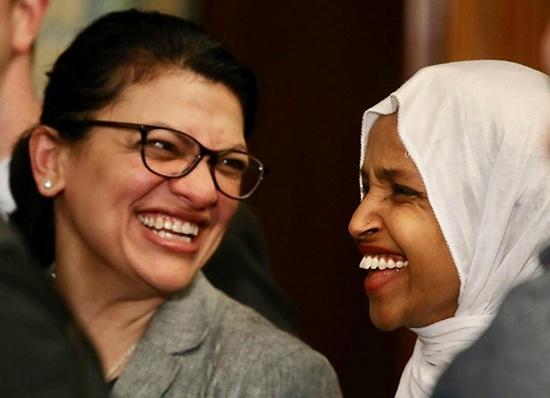 US President Donald Trump on Sunday told unidentified Democratic congresswomen to “go back” where they came from, prompting senior members of the party to brand him a “racist” and a xenophobe.

It is the latest controversial comment by Trump, who last year reportedly referred to countries in Africa as “shithole” nations, and who has spoken of “an invasion” of undocumented migrants, AFP reported.

In a tweet, Trump referred to “‘Progressive’ Democrat Congresswomen,” which appeared to be a reference to a group of outspoken relatively young, liberal women, all first-time members of the House of Representatives.

These include Minnesota Congresswoman Ilhan Omar, Rashida Tlaib of Michigan and Alexandria Ocasio-Cortez of New York.

Trump did not say whom he was referring to but said they “originally came from countries whose governments are a complete and total catastrophe, the worst, most corrupt and inept anywhere in the world”.

He accused the women of “viciously telling the people of the United States, the greatest and most powerful Nation on earth, how our government is to be run.

“Why don’t they go back and help fix the totally broken and crime infested places from which they came?”

Omar, who fled war-torn Somalia as a child and came to the United States as a refugee, is the first black Muslim woman in Congress.

Tlaib, who was born in Detroit, is the first American of Palestinian descent elected to Congress.

Ocasio-Cortez, who was born in New York, has ancestry from Puerto Rico, a US territory.

Congressman Don Beyer of Virginia said in a Twitter post: “This is undisguised racism, misogyny, and xenophobia, and everyone in Congress regardless of party should condemn it,” NBC News reported.

House Speaker Nancy Pelosi has warned her party to avoid the liberal policies pushed by Ocasio-Cortez and the other progressives if the Democrats hope to beat Trump in the 2020 election.

“I reject @realDonaldTrump’s xenophobic comments meant to divide our nation,” she said. Pelosi added that Trump’s comments reaffirmed “his plan to ‘Make America Great Again’ has always been about making America white again.”

Omar responded to Trump in a tweet on Sunday, saying she and her fellow members swear an oath only to the US, “which is why we are fighting to protect it from the worst, most corrupt and inept president we have ever seen”, NBC news reported.

Ocasio-Cortez also responded to Trump on Twitter on Sunday afternoon, NBC reported, saying “the country I ‘come from,’ & the country we all swear to, is the United States.

“But given how you’ve destroyed our border with inhumane camps, all at a benefit to you & the corps who profit off them, you are absolutely right about the corruption laid at your feet,” she continued. “You are angry because you can’t conceive of an America that includes us,” she said. “You rely on a frightened America for your plunder.”

“It is sad to see the occupant of the Oval Office transition from empowering and encouraging racist taunts to actually using them himself,” said the group’s national executive director, Nihad Awad.

“If Trump shouted the same thing at a Muslim woman wearing hijab in a Walmart, he might be arrested.”