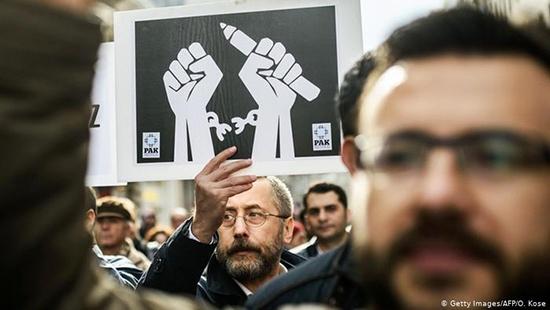 DW- Three years ago, a failed coup in Turkey led to a media crackdown. Since then, journalists have banded together to document the cases of reporters imprisoned or changed with crimes against the state.

This brief notice was a part of the “Upcoming trials” series featured on the website and the Twitter account of the Media and Law Studies Association (MLSA), a media freedom and legal rights organization in Turkey. It was founded by journalist Evin Baris Altintas in 2017 to track and document the cases against journalists, writers and academics imprisoned or charged with crimes after the failed coup against Turkish President Recep Tayyip Erdogan in July 2016. Parlak’s trial is one of dozens of cases that MLSA is monitoring.

Altintas believes the reason Turkish authorities targeted certain individuals is because they wanted to silence those willing to speak out against Erdogan and his policies. Freedom of expression and media freedom are protected by Turkish law.

“Nobody should be in jail for writing an article or a tweet,” said Altintas.

In order to track whether the Turkish judiciary is following established legal procedures in their handling of these proceedings, MLSA monitors numerous cases as they make their way through the Turkish judicial system. When a hearing takes place, freelance reporters or employees of the project attend and subsequently publish the developments in both Turkish and English. The goal is to bring the greatest possible exposure to these cases, both inside and outside Turkey.

“We send monitors to as many hearings as we can so that we can document them and ensure that a record of these cases will exist regardless of what happens in the future,” said Altintas.

MLSA is just one of a number of organizations formed after the government began arresting journalists, including the Platform for Independent Journalism (P24) and #FreeTurkeyJournalist, which also partners with MLSA for trial monitoring.

#FreeTurkeyJournalist is an online platform which, according to its mission statement, intends to “illustrate the severity of Turkey’s crackdown on journalists by highlighting the cases of individuals who have been detained and who face criminal charges.”

Read more: Can Dundar on the collapse of media in Turkey: ‘Did I upset you, boss?’

The project is supported by the International Press Institute (IPI), a Vienna-based organization made up of a network of media executives and leading journalists working together to defend media freedom. IPI has been working in Turkey since 1960 and has tracked the situation there since a state of emergency was declared by the Erdogan government following the coup attempt. It has counted 252 journalists and media executives who have been subject to prosecution, of which 135 journalists remain behind bars. Their research also found that 140 media outlets have been forcibly closed since the state of emergency was enacted, leaving hundreds of journalists out of a job.

“The state of emergency following the coup attempt was abused by the state to silence its critics and retaliate against journalistic scrutiny,” said Scott Griffen, IPI’s deputy director. “Unfortunately, even though the state of emergency has been lifted, many of the measures introduced were carried over and the repression has continued.”

IPI believes the rights of the journalists facing prosecution have been violated under Turkish law and that the judiciary ignores basic fair trial and due process guarantees. Griffen hopes that by shedding light onto the specific ways in which these violations occur, the IPI’s work will make it clear to relevant international actors and institutions that the Turkish justice system is not protecting the rights of defendants.

“We are concerned about the potential long-term damage that the ongoing media crackdown has had on the exercise of journalism in Turkey,” said Griffen. “The infrastructure of quality media has been seriously damaged and a generation of journalists faces an uncertain future in the profession.”

In a move that has been welcomed by the journalism community and media freedom organizations, a Turkish court recently overturned the life sentences for journalists Ahmet Altan and Nazli Ilicak, though their case is continuing. The two men were arrested in 2016 for allegedly encouraging the coup, and their case has garnered much media attention and international criticism.

Altan’s brother, the academic Mehmet Altan, had already been acquitted in the same proceedings and was released a year ago.

As most of the media houses that are still publishing in Turkey have either been co-opted by the Turkish state or are owned by Erdogan supporters, details of these trials are being largely ignored. MLSA’s Altintas hopes the attention being brought to these cases by media freedom organizations will pressure the government to drop any charges against journalists who were just doing their jobs.

“Our main motivation is to empower people in the media today, especially those being harassed legally, to know that they’re not alone,” said Altintas, adding that her organization does not just focus on the cases of noted journalists, but also those who have been arrested in towns and cities far from Istanbul and Ankara.

“We’re not interested in anybody’s political ideology or background; we only look at your indictment,” said Altintas, who has herself been present at many hearing for Kurdish journalists, members of an ethnic minority that has been especially targeted during the crackdown.

Kurdish journalist Ferhat Parlak faces up to 15 years in prison if convicted of the charges against him, which include “membership of a terrorist organization.” Prior to his arrest, he was a reporter for a local daily newspaper in Silvan in southeastern Turkey.

Speaking in his own defense, the 34-year-old father of two said that he was innocent of the charges and disputed evidence provided to the prosecution by a witness.

“I miss having breakfast with my two little daughters very much,” he said at the end of his statement. Following his hearing, Parlak was released on probation and the case adjourned until November 6.

Parlak’s family, colleagues, friends and fellow journalists were present at his hearing and according to local reports, responded to the decision to release him on probation with tears and hugs.

Also present in the courtroom was a monitor for MLSA.