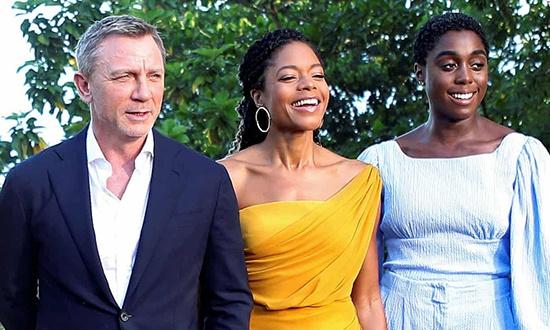 While Daniel Craig is set to reprise his role as James Bond in the next film, the franchise is set for a shake-up, with reports claiming that black British actor Lashana Lynch has been cast as 007 – taking over Bond’s secret agent number after his character leaves MI6.

The Mail has quoted from an anonymous “movie insider”, who says that the 25th film opens with Bond (Craig), retired in Jamaica, being called back to action to fight a new villain.

“There is a pivotal scene at the start of the film where M says, “Come in 007”, and in walks Lashana who is black, beautiful and a woman,” the source said. “It’s a popcorn-dropping moment. Bond is still Bond but he’s been replaced as 007.”

Originally from West London, Lynch, 31, made her film debut in 2011’s Fast Girls, but her breakthrough role came earlier this year, as fighter pilot Maria Rambeau in Captain Marvel.

The news of her being given Bond’s famous code name has been widely praised on social media, coming weeks after US singer Halle Bailey was cast as Ariel in Disney’s live action remake of the Little Mermaid.

The 25th Bond film – which is being shot in Italy and the UK – has been plagued by difficulties, beginning in October 2015 when Craig said he would “rather slash my wrists” than play Bond again.

In 2017, he confirmed he had relented, but, the same year, director Danny Boyle – who had been brought in to replace Sam Mendes, after Mendes refused to direct any more Bond films – also left, citing a dispute over the script.

American Cary Fukunaga was hired to replace them, and the film cycled through a series of script writers before Craig requested Fleabag’s Phoebe Waller-Bridge – only the second female writer in the history of the franchise – be brought in to polish it up.

Waller-Bridge is quoted in the Daily Mail as saying, “There’s been a lot of talk about whether or not Bond is relevant now because of who he is and the way he treats women. I think that’s bollocks. I think he’s absolutely relevant now.

“[The franchise] has just got to grow. It has just got to evolve, and the important thing is that the film treats the women properly. He doesn’t have to. He needs to be true to his character.”

Bond producer Barbara Broccoli told the Guardian last year that there would “never” be a female Bond.