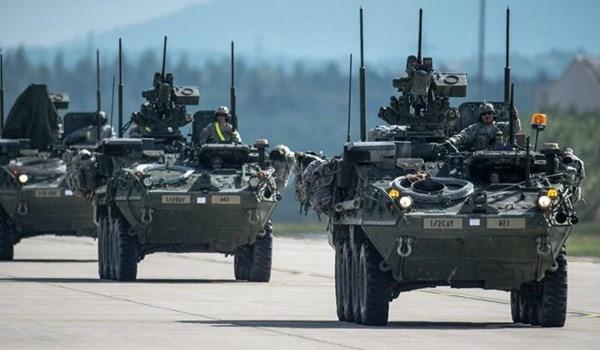 TEHRAN (FNA)- The US-led coalition dispatched nearly 300 trucks carrying new military equipment to areas under the control of the Kurdish militias months after it declared an end to the fight against ISIL, sources said.

The Syrian Observatory for Human Rights (SOHR) reported that the US-led forces sent a sum of 280 packed with military and logistic aids as well as military equipment to areas under the Syrian Democratic Forces (SDF) in Eastern Euphrates through Simalka crossing from Northern Iraq.

The SOHR noted that over 1,730 truck carrying US military aid have been sent to Eastern Syria by the US for SDF.

In a relevant development on Saturday, the US Army forwarded hundreds of trucks containing logistics and military equipment to the Syrian province of Hasaka.

The Kurdish-language Xeber24 reported that the 200 US trucks carrying military equipment, logistics, military vehicles, oil tankers and covered trucks arrived in US-backed forces’ military base in Hasaka province through Simalka crossing from US bases in Iraq.

It noted that the US military convoys have arrived in a military base controlled by the US-backed forces in Tal al-Bidar region of Hasaka province.

The Xeber24, meantime, reported that about 250 US military trucks carrying military and logistical support had arrived in Tal al-Bidar Military Base last week.

The US sends convoys of military trucks to the Kurdish-controlled areas in Eastern Syria while the US and its allied SDF have claimed that the military operations in Eastern Euphrates have come to an end.

In a relevant development late last month, the SOHR reported that hundreds of trucks loaded with logistics and military support had arrived in areas under control of the SDF in Hasaka province in Northeastern Syria from the US bases in Northern Iraq.