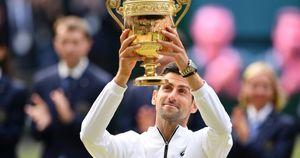 Press Association · Columnist
Novak Djokovic sees age as no restriction as he continues to chase down Roger Federer’s records.

Djokovic’s remarkable five-set victory over Federer in the Wimbledon final on Sunday was potentially pivotal in the race to decide who finishes their career with the most grand slam titles.

Had Federer taken one of his two match points at 8-7 in the fifth set, he would be sitting on 21, three ahead of Rafael Nadal and six clear of Djokovic.

Instead, his mark of 20 seems eminently within reach for either Nadal or Djokovic, who came through a deciding tie-break to claim a fifth Wimbledon title and 16th slam crown.

After his unexpected slump between the summers of 2016 and 2018, Djokovic has now won four of the last five slam titles and has time on his side.

At 32 he is a year younger than Nadal and has an advantage of nearly six years on Federer, who will turn 38 next month.

“It seems like I’m getting closer, but also they’re winning slams,” said Djokovic. “We’re kind of complementing each other. We’re making each other grow and evolve and still be in this game.

“Those two guys are probably one of the biggest reasons I still compete at this level. The fact that they made history of this sport motivates me as well, inspires me to try to do what they have done, what they’ve achieved, and even more.

“Whether I’m going to be able to do it or not, I don’t know. I’m not really looking at age as a restriction of any kind. What I said on the court, I really meant it: Roger really inspires me with his effort at his age.

“It depends not only on myself, it depends on circumstances in life. I’m not just a tennis player, I’m a father and a husband. You have to balance things out.”

Becker, who worked with the Serbian for three years from 2013 to 2016, believes Djokovic deserves more support after the Centre Court crowd overwhelmingly backed Federer during the near five-hour match.

“I hope next year, if they played again, it would be more even,” said the German.

“He came into the party that was the Roger and Rafa party and he became the party pooper. Now, after 16 majors, people have got to wake up to the greatness of Novak Djokovic.”

Federer certainly needs no convincing of that having now lost three Wimbledon finals in the last six years to his rival.

Virtually all the statistics showed him to have been superior on Sunday and it is the sense of a glorious opportunity lost that will be the most painful.

Federer insisted he was not too bothered by the historical implications, saying: “It used to be a really, really big deal.

“I take motivation from different places. Not so much from trying to stay ahead because I broke the record and, if somebody else does, well, that’s great for them. You can’t protect everything anyway.

“I didn’t become a tennis player for that. I really didn’t. It’s about trying to win Wimbledon, trying to have good runs here, playing in front of such an amazing crowd in this Centre Court against players like Novak and so forth. That’s what I play for.”

Federer will take some time off with his family to recover physically and emotionally before returning to action at the Masters event in Cincinnati beginning on August 11.