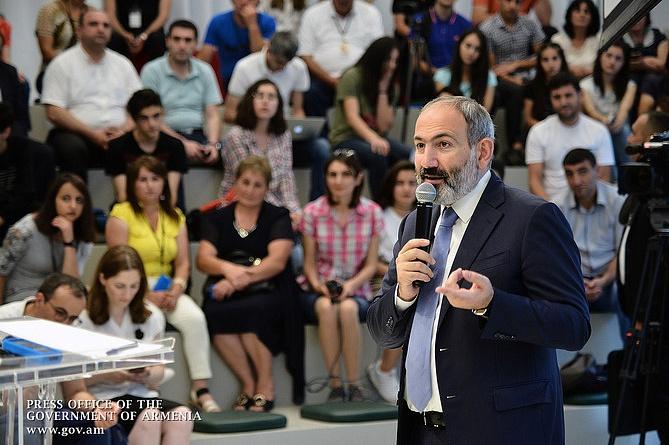 Speaking at the center, Nikol Pashinyan noted that the third stage of Diaspora Armenians’ activity has come.

According to the premier, the first was the stage of charity and assistance, the second came with the implementation of development programs, the third and the decisive stage is Armenia’s industrialization.

Thanking Children of Armenia Fund Manager Karo Armen, Pashinyan expressed conviction that at this stage the Diaspora should be much more active in its undertakings.

The premier is quoted by the government’s press office as saying that the economic foundation of our revolution is those people who have demonstrated initiatives in science, education, and business, which were beyond the scope of traditional oligarchic corrupt logic.

“I have seen initiatives in the Republic of Armenia, and most importantly, there has been a change in the behavior of a number of Diaspora figures in Armenia, they have come to the conclusion that the philosophy of charity should be changed by the logic of development, to implement projects that will help people act,” the Premier said, noting that he does not underestimate charity and bows down to all those who supported our country at different times.

“The revolution is that a 40, 50-year-old can come to the same room with a child and learn something. I consider myself a bearer of such values. I was a National Assembly member and went to the American University to study English together with 9-grade children. This is what I call revolution. If we fail to learn something new every other day, we waste time and prepare a propitious ground for despair. We have come out of the pit of despair, but we are still walking along the path of hope; we need to build a highway of hope. We know what should be done for it, Armenia should turn from an agrarian to an industrial country.”

Nikol Pashinyan stressed that this is just the way to changing our lives.