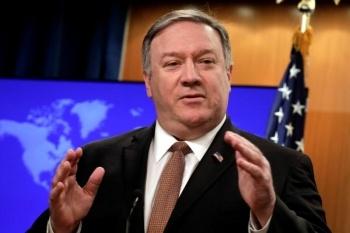 The Korea Times – U.S. Secretary of State Mike Pompeo said on Monday he hoped both North Korea and the United States could “be a little more creative” as the two sides push to restart talks aimed at ending Pyongyang’s nuclear program.

Pompeo did not say when the negotiations would begin.

Trump and Kim have met three times and held two summits over the nuclear issue. Talks in Hanoi in February collapsed without agreement between the two leaders, as the United States insisted North Korea completely denuclearize and North Korea pushed for relief from sanctions.

“I hope the North Koreans will come to the table with ideas that they didn’t have the first time. We hope we can we be a little more creative too,” Pompeo said in a radio interview on “The Sean Hannity Show”

“The president’s mission hasn’t changed: to fully and finally denuclearize North Korea in a way that we can verify. That’s the mission set for these negotiations,” Pompeo added.

Pompeo’s remarks come after Chinese President Xi Jinping urged Trump to show flexibility in dealing with Pyongyang and to ease sanctions on the country “in due course.”

China signed up for U.N. sanctions after North Korea performed repeated nuclear and missile tests, but has suggested they could be reduced as a reward for good behavior.

South Korean officials have expressed uncertainty that the talks between the United States and North Korea can take place this month.

North Korea has frozen missile and nuclear bomb testing since 2017, but U.S. officials believe Pyongyang has continued to expand its arsenal by producing bomb fuel and missiles. (Reuters)