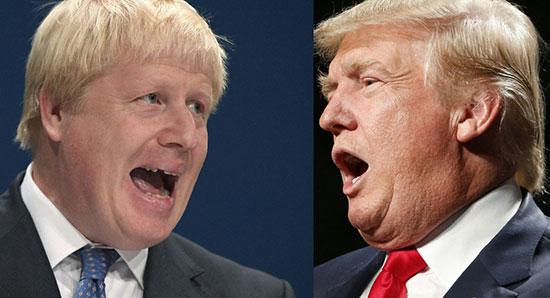 Boris Johnson and Jeremy Hunt, the two contenders to be Britain’s next prime minister, condemned tweets by U.S. President Donald Trump but refused to say if they think they were racist.

Johnson, the favorite to succeed Theresa May, also said he wouldn’t support U.S.-led military strikes against Iran, as the transatlantic alliance again became the focus of the election to lead the U.K.’s governing Conservative Party at a time when U.K.-U.S. relations are already strained.

The two men were asked their views after Trump posted a series of tweets suggesting that four U.S. congresswomen, led by Alexandria Ocasio-Cortez of New York, should return to the “broken and crime infested places from which they came.”

Johnson said the tweets were unacceptable. “When you are the leader of a great multiracial, multicultural society, you simply can’t use that sort of language about sending people back,” he said. “I mean that went out decades and decades ago — and thank heavens for that.” Hunt, who has a Chinese wife and mixed-race children, said the comments were “totally offensive.”

‘That Kind of Language’

“I have three half-Chinese children and they are British citizens,” Hunt said. “If anyone ever said to them ‘go back to China,’ I would be utterly appalled.” But when asked if Trump’s comments were racist, he said, “This is a president of a country which happens to be our closest ally and so it is not going to help the situation to use that kind of language about the president of the United States.”

During a debate webcast by the Sun newspaper Monday evening, the two men emphasized the importance of a strong relationship with Washington and praised Trump’s style. He is “shrewd,” Hunt said, while Johnson described him as “ruthless” and said he will be “very, very tough” when negotiating a deal with the U.K. after Brexit.

Last week Kim Darroch, the U.K.’s ambassador to the U.S., resigned after Trump reacted angrily to the leaking of confidential cables the diplomat had sent to London criticizing his administration. While Hunt, the foreign secretary, defended Darroch, Johnson refused to back him in a TV debate, accelerating his departure, according to people familiar with the situation.

Johnson did, however, set up a clash with the Trump administration over Iran and attempts to stop the Islamic Republic developing a nuclear weapon. He said the Tehran government is a “disruptive, dangerous, difficult” regime, but military action is not “a sensible option for us in the west.”

“Diplomacy must be the best way forward,” Johnson said. “If you ask me if I think, were I prime minister now, would I be supporting military action against Iran, the answer is ‘No.”’

Both the U.S. government and Iran have said they are not seeking a war. The president has said military action remains an option on the table but canceled a planned air strike in retaliation for Iran shooting down an American drone last month, opting instead for increased sanctions.

But Johnson’s comments, ruling out joining any U.S.-led military action, risk undermining Trump’s attempts to pressure Iran to rein in its nuclear ambitions and end its destabilizing activities in the region.

Hunt said there is a danger that rising tensions will lead to an unintended conflict. “The risk we have is an accidental war because something happens in a very tense volatile situation,” Hunt said.

During the debate, the second and final confrontation between the two men during the leadership campaign, both contenders also:

— With assistance by Robert Hutton