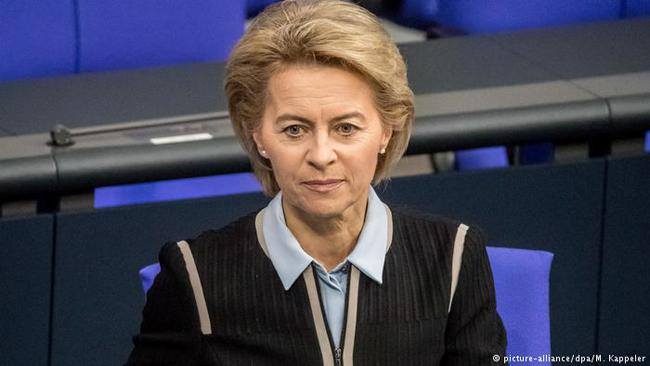 AFP- Passionately pro-European, disciplined and ambitious, German Defence Minister Ursula von der Leyen might have seen her political star fade in Berlin but is now aiming for the top job in Brussels.

Once considered a likely successor to Chancellor Angela Merkel, the mother-of-seven and trained medical doctor has dropped in the domestic popularity stakes in the tough post of overseeing the German armed forces.

The Brussels-born political blueblood and London School of Economics graduate is the only minister to have served with Merkel since the beginning of her marathon reign in 2005 and previously ran the family affairs and labour ministries.

A life-long high achiever, von der Leyen has at times drawn envy and animosity for her best-in-class style, the persona of a super-mum with iron discipline and a perfect hairdo that some voters find unnerving.

She was once dubbed “the soloist” for her go-it-alone style, and a recent poll by Bild am Sonntag newspaper rated her as the second-least popular member of Merkel’s cabinet.

A fluent English and French speaker, she has however built a solid network of allies across Europe, crucially including French President Emmanuel Macron, and launched a strong charm offensive in recent days.

Nonetheless, her success is far from assured given widespread anger that EU leaders, after days of backroom wrangling, chose von der Leyen rather than a European parliamentarian who had campaigned for votes.

In a hard-hitting paper handed out in Brussels, the SPD listed reasons they deemed von der Leyen “an inadequate and unsuitable candidate”, among them Germany’s poor military preparedness and past accusations of plagiarism in her doctoral dissertation.

Others praise the candidate highly, including the SPD’s former interior minister Otto Schily, who labelled her “a highly competent, intelligent, experienced politician who really has all the qualities that are critical for a commission president”.

– Underestimated as a woman –

During her term, Germany has sent troops on dangerous deployments from Afghanistan to Mali while drawing frequent political fire from US President Donald Trump for what he considers Berlin’s insufficient military spending.

Von der Leyen has also weathered scandals over far-right extremists within the army, controversial contracts with business consultants and cost over-runs, including for the renovation of a vintage naval vessel.

The minister has said she will resign her portfolio regardless of the outcome of Tuesday’s vote “in order to serve Europe with all my strength”.

She was born as Ursula Gertrud Albrecht on October 8, 1958 in Brussels, where her father Ernst Albrecht worked as a senior European Commission official, and lived there until age 13.

As the daughter of Albrecht, who went on to become CDU state premier of Lower Saxony, she spent her late teenage years under police protection at a time when leftwing extremists were targeting political and business figures.

The threat forced her to move to London to live in an uncle’s flat under the assumed name of “Rose Ladson”, and kept a security detail at her side well into adulthood.

A top-grade student, she studied first economics then medicine, going on to work in a women’s clinic.

She interrupted her career to be a housewife in California when her husband, a professor of medicine, won a scholarship to Stanford.

She joined the CDU at age 32 and entered the Lower Saxony parliament, going on to win her first Bundestag seat in 2009.

Von der Leyen has remained an outsider in the traditionally conservative and male-dominated CDU but rose in the Merkel era.

As family affairs minister, she fought to overhaul parental leave policy to encourage fathers to also take time to care for their children.

In a rare political gamble, she broke party ranks in 2013 to push for a women’s quota in corporate boardrooms.

“She is used to being underestimated as a woman, but has beaten men throughout her political career,” said her biographer Daniel Goffart.

“If she becomes the first woman to lead the European Commission, that will make her proud, but she won’t see it through the gender perspective but from the point of view of a politician who wants to solve the real problems.”