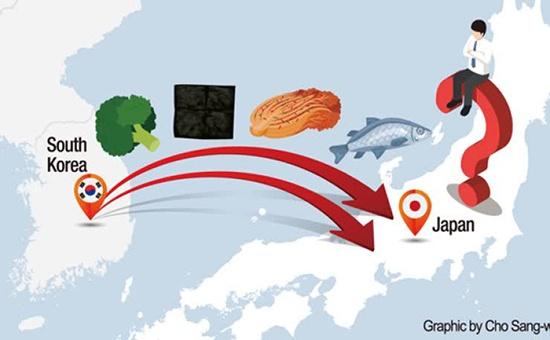 The  Korea Times -By Nam Hyun-woo

The domestic agriculture and fishery industries are expressing growing concern that their products could be the next target of Japan’s trade restrictions against Korea, local officials said Tuesday.

They fear Tokyo may raise non-tariff barriers, such as tougher customs clearance procedures for food products, as Japan is poised to expand its export curbs to various items. The two countries have already exchanged tit-for-tat measures in fisheries over Korea’s ban on seafood from Japan’s Fukushima Prefecture.

According to the Ministry of Agriculture, Food and Rural Affairs, no cases of domestic food product exporters suffering damage in trade with Japan have been reported to the government since Tokyo launched its export restrictions on high-tech materials to Korea earlier this month. But it is looking into “all possibilities” and coming up with contingency plans in case the trade restrictions spread to farming and fishery products.

“We don’t see a high possibility of Japan banning imports of Korean agricultural products or placing other restrictions on Korean foods immediately,” a ministry official said. “But we are looking into all possibilities, because customs, quarantine and inspection procedures are up to a country’s discretion, thus it is difficult for another country to argue about setbacks in those processes.”

The ministry met with nine food exporters, including the Korea Ginseng Corp. and Daesang, July 5, a day after Japan officially announced the initial export restrictions on resource materials for manufacturing semiconductors and display panels.

Though Japan is citing security concerns as the reason for the restrictions, it appears to be a retaliatory move against last year’s Supreme Court rulings here against Japanese firms over compensation for wartime forced labor.

Following the restrictions on high-tech materials, Tokyo said it would remove Seoul from its “white list” of 27 countries given customs shipping-clearance priority for the import of industrial materials from Japan, casting fears it will expand its trade restrictions.

“We don’t sense the impact of Korea-Japan trade tension currently, but it is hard to deny that there are worries over potential restrictions in customs and quarantine procedures,” an official at the Korea Agro-Fisheries & Food Trade Corp. said. “For Korean exporters, Japan is one of the best markets for fresh food and the customs systems between the two countries are very smooth. For example, Korean pepper exporters are cleared by customs within a day currently, but setbacks in those procedures will deal a critical blow to the freshness of the products.”

The main products include dried laver at $118 million, peppers at $92 million and kimchi at $56 million.

Of those products, producers of pepper and dried laver could be heavily affected, because their shipments accounted for a respective 99 percent and 22.5 percent of their total exports.

“Firms exporting foods to Japan have worries on potential non-tariff barriers because Japan has already strengthened inspections on a number of seafood imports from Korea, which seems to be a response after Korea’s import ban on seafood from Fukushima.”

On May 30, Japan’s Ministry of Health, Labor and Welfare announced it would strengthen inspections on five Korean seafood products, including halibut and clams. This came after a WTO decision in April upholding Korea’s 2013 blanket import ban on seafood from the region, which suffered a nuclear disaster in 2011.