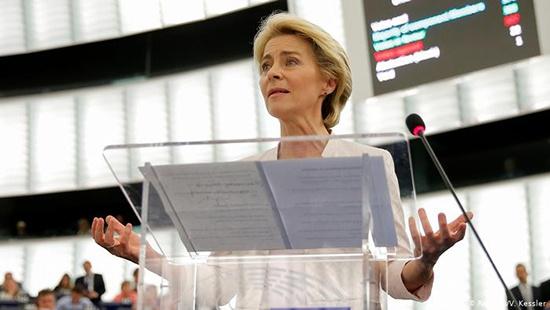 DW – Up to the last minute it was unclear if Ursula von der Leyen would be accepted as the next European Commission president. Her stellar speech and a lack of alternatives won MEPs over, says DW Editor-in-Chief Ines Pohl.

Despite our digital age, there are moments when the spoken word still carries tremendous weight. That became clear when Ursula von der Leyen on Tuesday addressed the European Parliament in Strasbourg in an effort to win over MEPs. Officially, the spoken word reigns supreme in parliament — as indicated by its name, which is derived from “parler,” to speak. But in reality, parliamentary decisions tend to be agreed before a single argument has been exchanged. This time, however, it was not so. Germany’s Ursula von der Leyen could win big, or lose. And she had to hold her own on the daunting and at times bewildering European stage. She had to win over skeptics, appeal to allies, and make offers to her opponents to take the wind out of their sails. And, she had to create a genuinely European moment.

Ursula von der Leyen accomplished all this, managing to get the support to become the next president of the European commission by a slim majority of just 9 votes. To the dismay of many of her conservative peers, the staunch feminist highlighted the importance of social and environmental policies, and confidently underscored the need for gender equality. Her brightest idea, however, was surely to hold her speech in three European languages. She spoke in French about the feeling of a revived EU emboldened by greater citizen participation. She chose English to talk facts and express demands, such as for higher taxes on major corporations, and for genuine gender equality. And lastly, von der Leyen addressed MEPs in German, emotionally arguing why she, born in Brussels, is the right fit for the bloc’s top job.

It’s no secret that von der Leyen was not the favorite for the job. She knew she would have to fight this disadvantage with finesse and thoroughness, casting herself in the perfect light. She could have failed — but she surprised everyone and turned her disadvantage into an advantage. She gave anti-Europeans and those who reject the system the cold shoulder, easily countering their provocations. She must stick to this course with determination and close the right flank. While none of this guarantees a successful European Commission presidency, it is a good start — and a good day for the European Parliament, which had a genuine democratic choice.

The biggest losers are the German Social Democratic MEPs. Until the very end, they stressed the importance of sticking to one’s principles and insisted that only a lead candidate (“Spitzenkandidat”) should get to run for the EU’s top job. It seemingly did not matter to them that none of those candidates could command a majority. Or that the EU would have descended into a serious crisis if von der Leyen had not won.

The European Parliament has spoken. And decided, once again, that politics is the art of the possible.