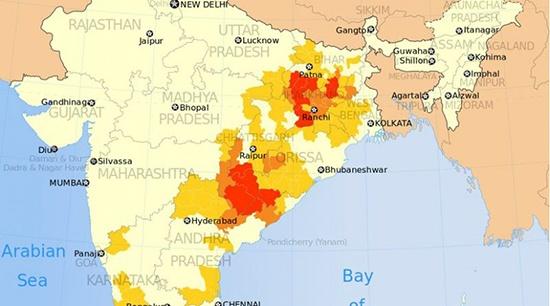 A couple of years ago, a significant change took place within the Communist Party of India-Maoist (CPI-Maoist), effects of which are now creating shockwaves in the Maoist infested territories in the country. For the first time since its formation in 2004, the CPI-Maoist underwent a change of guard, and Nambala Keshava Rao, alias Basavaraj, was appointed as its general secretary. His name was proposed by Muppala Lakshmana Rao, alias Ganapathy, the founding general secretary of the banned outfit in a meeting of its politburo members. On 10 November 2018, the CPI-Maoist issued a press statement to announce this development.

Prior to becoming the General Secretary of the CPI-Maoist, Basavaraj—who is also the founding member of the organisation’s Central Committee—served as the head of the outfit’s Central Military Commission (CMC), which is responsible for leading the activities of the CPI-Maoist’s military wing, the Peoples Liberation Guerrilla Army (PLGA), for decades. An expert on military tactics and the use of Improvised Explosive Devices (IEDs), Basavaraj has been underground for the past two decades. His last known public appearance was in 1980 when he was arrested in Srikakulam where a clash took place between two students unions—the Radical Students Union of the then Communist Party of India (Marxist–Leninist) People’s War, and the Akhil Bharatiya Vidyarthi Parishad. An engineering graduate from the Regional Engineering College, Warangal, Basavaraj is believed to have been trained in guerrilla warfare by the Liberation Tigers of Tamil Eelam (LTTE).

Every attack that had been carried out after he assumed charge as the CPI-Maoist’s general secretary is characterised by surgical precision resulting in maximum damage caused to lives and property. So far, in 2019 alone, at least 107 persons have been killed in left-wing extremism (LWE)-linked violence across India. In 2018, there were 412 CPI-Maoist related deaths, in comparison to 335 in 2017. Over the past one-and-a-half years, not only have the casualty figures risen but the CPI-Maoist has also displayed greater aggression and carried out well-planned attacks by using IEDs in different forms. Basavaraj is believed to have planned the 23 September 2018 attack in which two Telugu Desam Party politicians from Andhra Pradesh—Member of the Andhra Pradesh Legislative Assembly (MLA) Kidari Sarveswar Rao, and former MLA Siveri Soma—were killed. On 9 April 2019, Basavaraj, in an attempt to derail the then ongoing poll process, supervised another terror plot in which Bharatiya Janata Party politician and Member of Chhattisgarh’s Legislative Assembly, Bhima Mandavi, and four of his security personnel, were killed in an IED blast in the state’s Dantewada district. Basavaraj is also suspected to have instructed the outfit’s local units in Maharashtra and Chhattisgarh to carry out the 1 May 2019 IED blast in which 15 personnel of the Quick Response Team of Maharashtra’s Gadchiroli police and one civilian were killed.

Basavaraj has been at the forefront of all the major CPI-Maoist attacks over past several years. According to intelligence inputs, he directly planned and ordered every offensive against the security forces and political leaders in the ‘red territory’ of Chhattisgarh, Odisha, Maharashtra and Andhra Pradesh. In 2010, he executed the deadliest CPI-Maoist attack in history, in which 74 Central Reserve Police Force personnel and two policemen from Chhattisgarh police were killed in Dantewada district. Another attack in this list is the 25 May 2013 attack in Jeeram Ghati, in which 27 people—including former state minister and Salwa Judum leader, Mahendra Karma, and Chhattigarh Congress Chief, Nand Kumar Patel—were killed.

With Basavaraj at the helm of CPI-Maoist affairs, it is widely believed that the outfit’s guerrilla fighters would now be more aggressive and ruthless than before. Compared to his predecessor Ganapathy, who was more inclined towards ideology, Basavaraj’s leadership would infuse strong military tactics on the ground. Basavaraj’s key characteristichas been his strong military tactics in the form of guerrilla warfare and the use of IEDs in new forms. His engineering qualification provides him with an edge. Meanwhile, given the attenuation in the CPI-Maoist’s base across the Red Corridor, Basavaraj’s immediate objective will be strengthening the PLGA, followed by expansion of the outfit’s base through a large scale recruitment drive to the Maoist cadre.

Coronavirus: The last-round fight for NYC’s bastions of boxing?