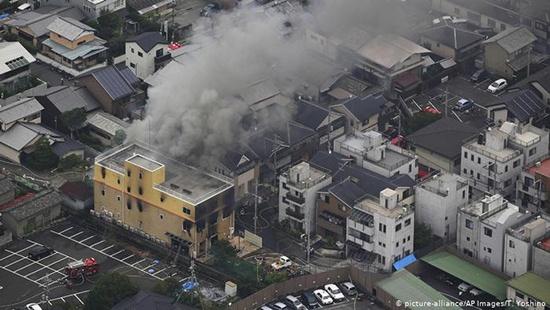 Japanese authorities say more than 20 people are feared dead in a suspected arson attack on an anime studio in the city of Kyoto. A man reportedly set off the blaze after pouring a suspicious liquid around the premises.

At least 20 people are presumed dead in a fire that broke out at the three-story Kyoto Animation production studio early Thursday, Japanese authorities said.

Public broadcaster NHK reported that police had detained a 41-year-old man who allegedly spread a gasoline-like liquid around the property and said “you die” before setting it alight.

Fire department official Satoshi Fujiwara said more than 35 people were injured, some of them critically, and there were fears for up to 18 others who may still be trapped inside. One person was confirmed dead, while 12 others were found without vital signs on the first and second floors of the building, Fujiwara added.

“Rescue operations are continuing, and we are trying to bring out several victims who are trapped inside … including ones who may not be able to move by themselves,” a fire department spokesman said.

The suspect was also injured and taken to hospital, officials said.

Around 70 people were believed to have been in the building when the blaze started. Footage on local television showed the studio’s blackened exterior with white smoke billowing from the windows.

Kyoto Animation, better known as KyoAni, was founded in 1981 and has produced successful anime series such as “Lucky Star,” “The Melancholy of Haruhi Suzumiya,” and “K-ON!” as well as the film “Free! Road to the World — The Dream,” which is due for release this month.