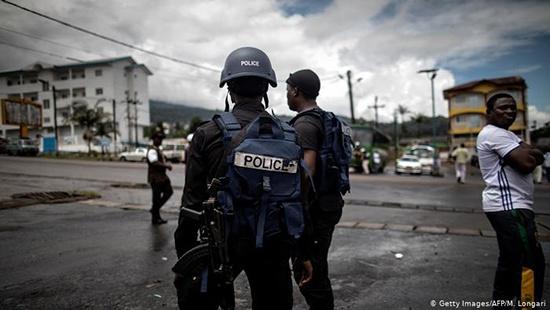 Switzerland has agreed to mediate talks between the government of Cameroon and separatist leaders aimed at faciliating a peaceful resolution to a three-year conflict. This is welcome news, says Nkongho Felix Agbor Balla.

The conflict in Cameroon has engulfed the country’s English-speaking northwest and southwest regions since late 2016. It is one of the world’s most neglected crises, despite a magnitude of violence, inflicted by both military and armed separatist groups, causing unimaginable suffering. The military has committed crimes against humanity against civilians in the English-speaking regions, as documented in a report co-authored by the Cameroon-based Centre for Human Rights and Democracy in Africa (CHRDA) and the Raoul Wallenberg Centre for Human Rights (RWCHR) in Canada.

Soldiers routinely torch entire villages to the ground — this has become an established and systematic military tactic. They indiscriminately shoot at civilians, at times leaving bodies piled in the streets. Astonishingly, more than 200 villages have been set ablaze, with a continuously increasing pace of attacks. As a result, many people are burned alive in their homes, such as a 70-year-old man who did not hear his neighbors’ warnings due to a hearing disability.

Civilians, including journalists covering the crisis, have been rounded up, arbitrarily detained and tortured, without charge or access to lawyers. Sexual and gender-based violence has also become rampant, often targeting girls below the age of 18.

Cameroon now has the sixth-largest forcibly displaced population in the world, with approximately half a million people — one tenth of the region’s population — living in the bush without sufficient food, water or protection from exploitation. There are more than 1.3 million Cameroonians in urgent need of humanitarian aid in the English-speaking regions alone.

While the crisis is rooted in a complex colonial history that birthed the current bijural and bilingual country, it is important to consider how the crisis spiralled from its peaceful origins into the catastrophe it is today.

How the crisis began

In late 2016, Anglophone lawyers and educators peacefully demonstrated for basic civil and political rights after years of marginalization in the majority French-speaking country. In particular, Anglophone lawyers and educators were protesting the imposition of French-speaking judges and teachers in English-speaking courts and schools. What started as a simple request for the recognition of rights based on legitimate grievances morphed into a conflict enveloping nearly the entire English-speaking region. Moderate voices were swiftly drowned out by radicalized forces calling for the creation of a separate country. Hate speech surfaced in both media and government discourse in a disturbing trend that, as history warns, can quickly translate into mass atrocity and even genocide.

It is, therefore, encouraging that Switzerland has agreed to mediate a dialogue in the pursuit of peace and reconciliation. However, the conflict’s underlying causes will only be addressed and redressed by an all-inclusive dialogue that represents the various shades of opinion in Anglophone Cameroon. The Swiss mediators should ensure that they invite a variety of Anglophone voices, certainly not just those who have taken up arms.

Switzerland should also invite other bodies to participate as mediators, particularly the African Union which recently mediated a power-sharing agreement between military and civilian leaders in Sudan. Canada is also an ideal candidate to lead the process, given its bijural, bilingual character and long-standing bilateral relations with Cameroon.

Role for the UN and AU

The dire situation on the ground, however, demands coordinated international attention and action, even if a political solution to the underlying conflict is not imminent.

First, the UN Security Council should add Cameroon to its agenda as a regular stand-alone item, as nine different human rights organizations have recommended in an open letter.

Second, the African Union should establish a panel of independent international experts to investigate evidence of crimes against humanity in Cameroon, as the Organization of American States did regarding atrocities in Venezuela.

Third, states should increase funding for the UN’s Cameroon Humanitarian Response Plan. As it stands, the Response Plan is severely underfunded. Key frontline humanitarian organizations will be forced to withdraw if additional funding does not reach them soon, according to the UN’s Under-Secretary-General for Humanitarian Affairs and Emergency Relief Coordinator.

Finally, individuals and collectives must continue to shine a protective spotlight on the victims of the Cameroon crisis, whose pain and plight can no longer go unheard, unnoticed or unaddressed. The children of Cameroon at the mercy of this raging violence, including the more than 600,000 currently prevented from going to school, deserve no less.

Nkongho Felix Agbor Balla is the founder and director of CHRDA.