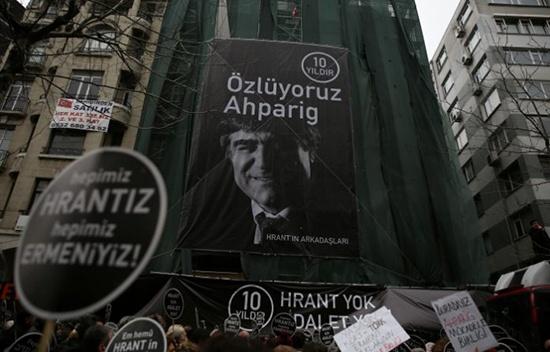 Erhan Tuncel, one of the main suspects standing trial for allegedly playing a role in the 2007  murder of Turkish-Armenian journalist Hrant Dink, was sentenced on Wednesday to 99 years, six months in prison on charges of founding and leading a criminal network, the Diken news website reported.

Tuncel, who was previously released pending trial, was rearrested after the ruling. As he was being taken away by the police, he was heard saying “Serving the Turkish Republic never goes unpunished.”

Dink was shot dead by Samast, an ultranationalist youngster in İstanbul on Jan. 19 2007.

After murdering Dink in front of his office in İstanbul’s Şişli district, Samast was caught, tried and sentenced to 22 years, 10 months in prison by the 2nd Juvenile High Criminal Court on charges of “intentional murder” and “possessing an unregistered firearm.” The Supreme Court of Appeals upheld Samast’s sentence in March 2012.

The investigation into the assassination became more complicated with new claims, especially after the government pinned the blame on the faith-based Gülen movement, which it also accuses of masterminding a failed coup in 2016.

In December 2016 one of the judges hearing the trial was detained in his chambers during a break in proceedings.

In June, the files of nine suspects including Samast, Hayal and Tuncel were separated from the case considering the approaching statute of limitations.