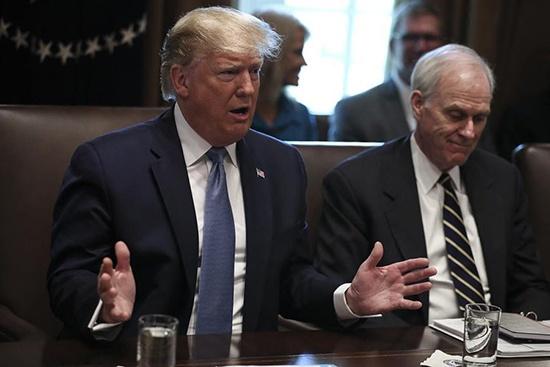 President Donald Trump said on July 16 the U.S. will not sell Turkey advanced F-35 fighter jets over Ankara’s acquisition of the Russian S-400 anti-air system, bemoaning the fact and blaming his predecessor for the impasse.

“We have a situation where Turkey is very good with us, and we are now telling Turkey that because you have really been forced to buy another missile system we’re not going to sell you the F-35 fighter jets,” Trump told reporters during a Cabinet meeting at the White House.

The Trump administration had threatened to expel Turkey from the F-35 fighter program if it acquired the S-400 from Russia, warning the anti-air system could be used by Moscow to covertly attain secret information on the stealth fighter.

The delivery of S-400 components began last week and is ongoing. Turkey‘s Defense Ministry said a twelfth Russian plane with the anti-air parts landed at Mürted airfield outside Ankara on July 16.

Following protracted efforts to purchase an air defense system from the U.S. with no success, Ankara signed a contract in 2017 to purchase the S-400s from Russia.

Trump blamed the ongoing row over the F-35 on the Obama administration, whom he said created the problem by not allowing the Turkish government to purchase Patriot missile systems.

“As soon as they found out that they were going to have to buy the missiles, comparable missiles, not as good a missile, but a comparable almost missile from Russia – all of a sudden everybody started rushing and saying to Turkey, ‘Okay, we’ll sell you the Patriot missile,'” he said.

“But by that time, Turkey had already signed and paid a lot of money to Russia for the missile system that they were not allowed to buy here, foolishly. Because Turkey is a NATO member.”

The U.S. halted in June training for Turkish pilots as a step in winding down Turkey‘s participation in the F-35 program.

Washington has also threatened sanctions over Turkey‘s purchase, with Ankara responding that any sanctions would be met in kind.

Secretary of State Mike Pompeo and the president are “reviewing” which sanctions under the Countering America’s Adversaries through Sanctions Act will be implemented, the State Department said.

State Department spokeswoman Morgan Ortagus did not specify where in the review Pompeo and Trump are, nor did she indicate which sanctions are being weighed, saying only “they’re in the process.”

“The secretary and the president will make a decision based on what they’re required to do according to U.S. law,” she said.