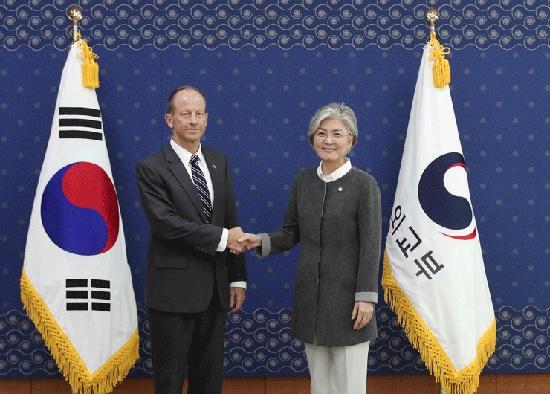 The United States is unable to engage in the deepening trade feud between Korea and Japan, as Washington cannot pick a side with either of its major Asian allies, according to the top U.S. diplomat for East Asia.

The assistant secretary met with Foreign Minister Kang Kyung-wha and discussed the economic conflict that started July 4 when Japan imposed restrictions on exports to Korea of three resource materials used in the manufacturing of semiconductors and display panels by Korean tech companies.

The Ministry of Foreign Affairs did not share details over the closed-door meeting between Kang and Stilwell, but they were expected to have exchanged ideas on how to seek a breakthrough in the dispute.

Kang reportedly asked for Washington to play a more active role in the dispute, as the issue could damage the trilateral alliance among Seoul, Washington and Tokyo.

“The U.S. has a deep sense of concern that the status quo is not doing any good for any of the three allies, and if the situation drags on, a third-party country may benefit from the dispute,” an official from the foreign ministry said, adding that Kang may have expressed such a concern to Stilwell.

“But Washington remains candid in its position that it cannot side with any party, as both countries are close allies,” the official said.

After the conflict started, the U.S. expressed concern that the dispute could create a crack in the alliance between two of its key Asian security allies.

Washington, however, has yet to take steps to settle the dispute, and instead, kept a low-profile apparently amid worries that any hasty action may deteriorate the status quo.

Stilwell said Washington was looking for its two allies to come up with a diplomatic solution to their dispute. However, he did not give further details to reporters as he left the ministry after his talks with Kang.

“The truth is no significant issue in this region can be resolved without cooperation between our two allies, Korea and Japan,” he said.

“The U.S. places great priority on strengthening relations between the U.S. and our two close allies, and we had a great discussion,” Stilwell said.

“We, by just virtue of alliance will engage in all issues deal with U.S. and Korea,” he said.

Park Won-gon, a professor of international relations at Handong Global University, said the top priority to resolve the trade conflict lies in the resumption of dialogue between the two countries.

“The government needs to seek a way to resolve historical disputes with Japan via dialogue,” Park said.

The dispute started last year when Korea’s Supreme Court ruled that Japanese companies should compensate Koreans mobilized to work for them during Japan’s colonial rule of the Korean Peninsula.

Japan expressed fierce opposition to the rulings and called for the issue to be referred to an international arbitration panel. But on Tuesday, the Korean government rejected this, further clouding the outlook for an earlier settlement of the dispute.

The professor said Korea, however, should not “unilaterally reject” the proposal from Japan when concerns are growing that Tokyo may take additional retaliatory measures.

“In some cases, the government should choose to put more priority on the national interest,” Park said. “Currently, the best-case scenario for Korea is to resume talks on the historical issues with Japan and seek a diplomatic solution.”