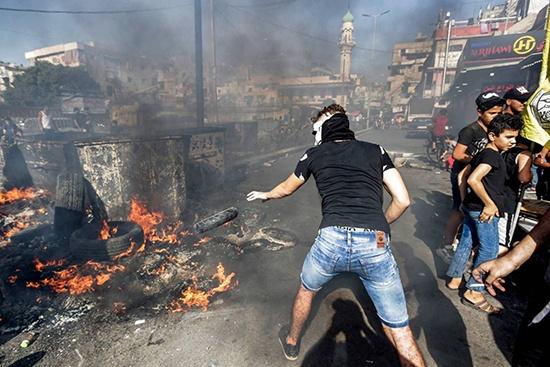 Since Monday, hundreds of Palestinians have protested in the streets of Beirut and across 12 camps against Abousleiman’s crackdown on foreign workers without a permit, a move he says ensures equality among all.

Palestinian bodies have taken offense, however, saying that the campaign unfairly targets them.

This was disputed by Abousleiman, who said Thursday that of the 600 violations recorded since last week, a mere two are related to Palestinian businesses. Fines will also be equal to those incurred by Lebanese businesses, he said.

Under the new restrictions, Palestinian refugees are required to obtain an official permit from authorities while also enrolling in social security. The social security enrollment provision was later suspended to ease tensions.

“Lebanon’s labor law protects the Palestinian workers from arbitrary expulsion and guarantees that they receive the minimum wage,” Abousleiman said, adding that it exempts them from work permit fees and preliminary approval. This sentiment was echoed by Ziad El Sayegh, an expert on Public Policies and Refugees, who told Annahar that obtaining the requisite permits would safeguard the rights of Palestinian workers.

“There are tremendous benefits to registering in social security. including end of service indemnities”, he said, adding that Palestinians’ economic production is reinjected in the Lebanese cycle as they are unable to return home.

The issue can be traced back to the broader Lebanese labor law which does not grant Palestinian refugees a special legal status that is different from foreigners. To be eligible to obtain a job, Palestinians were required to obtain a work permit prior to employment and the principle of reciprocity of treatment in Lebanon, a condition virtually impossible to meet for Palestinians given the lack of a Palestinian State in the legal sense.

In 2010, Article 59 of the labor law was amended, in such a way as to exempt Palestinian refugees from the principle of reciprocity, expanding their rights to a certain extent.

The amendments excluded exclusively Palestinian refugee workers, who are registered in the records of the Ministry of the Interior.

However, Palestinians have limited access to the labor market and are mostly involved in construction, small crafts and clerical jobs, with only the Nurses union allowing Palestinians to work in their sector given a shortage of Lebanese nurses, El Sayegh told Annahar.

The majority of professions are still reserved for Lebanese, such as medicine, law, engineering, and enforcement.

Speaker Nabih Berri, a Shiite, has taken a leading role in appeasing tensions, urging Abousleiman, a Lebanese Forces Minister, to roll in the new measures.

To avoid an escalation and spillover, El Sayegh called for a bridging of the gap between the humanitarian and sovereign elements of the Palestinian issue in Lebanon.

“It needs a clear and tranquil dialogue between the Lebanese government and the Palestinian body, free of outside pressures or forces that might seek to broaden the conflict,” he said.