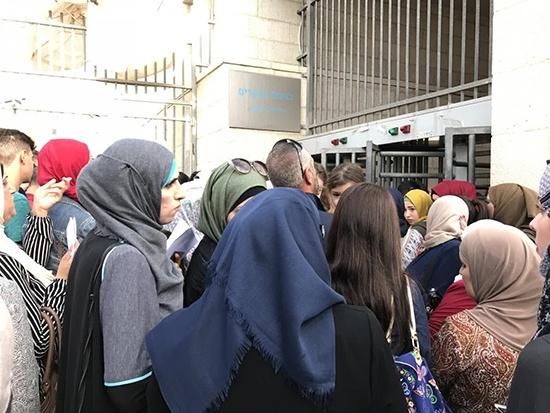 Despite a court order, Palestinians in East Jerusalem still forced to wait in humiliating line to obtain basic servicesղ

In the neighbourhood of Wadi al-Joz, meaning “Valley of the Walnuts,” in occupied East Jerusalem, lies a branch of the Population and Immigration Authority of the Israeli Ministry of Interior.

Registering a birth or death? Need to apply for a passport or an ID card? This is the only place providing these services to the nearly 300,000 Palestinian residents of East Jerusalem.

In most countries, these basic services would be provided without hassle – or at least not too much. But for Palestinians in East Jerusalem, obtaining essential services is an uphill battle.

Residents and their lawyers say Israeli officials at the branch are purposefully dragging their heels with their duties in order to make Palestinians’ lives so unbearable that they will leave Jerusalem.

“It’s hell. It’s just hell,” said Erez Wagner, a coordinator with the Jerusalem-based HaMoked Center for the Defence of the Individual, which went to Israeli High Court earlier this year to try to improve what they describe as “inhuman conditions” at the branch.

The court ruled that ministry branches in West Jerusalem should provide some services to Palestinians from East Jerusalem, but even this concession has had little material change on the ground, he said.

The challenges that residents face at the branch are just one piece of a wider puzzle of Israeli occupation that has made life for Palestinians in East Jerusalem a bureaucratic nightmare for decades.

As a result of the Israeli occupation in place since 1967, any Palestinian born in East Jerusalem receives only temporary residency status, leaving them essentially stateless.

But even holding on to that temporary residency is a challenge. Among other legal hurdles, Palestinians in Jerusalem must continuously prove that the city is their “centre of life” by submitting dozens of documents including rent contracts, salary slips, electric and water bills, as well as tax payments.

All of these services are only available at the branch office, leaving Palestinians determined to continue living in East Jerusalem with a stark choice: hire a lawyer or wait in line.

Under blazing sunshine or pouring rain, long lines of people of all ages including infants, the elderly, and people with special needs, regularly snake outside the gates of the ministry branch in Wadi al-Joz.

There are no umbrellas to provide shade, seats or toilets, and many of those waiting will have come before sunrise for a spot in line, like Fida Abbasi, who lives in East Jerusalem’s Silwan neighbourhood.

Fainting in line is not unusual and sick people have been known to give up on critical services, unable to stand for hours, according to HaMoked.

But the hours of waiting, often dealing with guards who are willing to humiliate those in line, she said, is just the tip of the iceberg. After standing outside, Palestinians must then pass through metal gates, where men and women are separated.

Israeli guards then call them, one by one, to pass through metal detectors and have their bags thoroughly searched. If someone is carrying a water bottle, they must take a sip in front of the guards.

‘It’s like a military base. No photography is allowed, and sometimes the guards will confiscate your water bottle or other items’

“It’s like a military base. No photography is allowed, and sometimes the guards will confiscate your water bottle or other items,” Abbasi told Middle East Eye.

In 2018, the Israeli government introduced a Hebrew-language phone app, and obliged Palestinians to register for an appointment this way to obtain any kind of service at the ministry.

But the only appointments on offer, residents told MEE, range from six months to a year in advance. Meanwhile, those who attempt to enter without an appointment are stopped by guards at the gates.

In August 2018, four employees at the Wadi al-Joz branch were arrested, on suspicion of collecting hundreds of thousands of shekels in exchange for expediting waiting times. According to the Israeli daily Haaretz, investigators found that the employees had reserved hundreds of appointments and sold them for hundreds of shekels each.

Unable to secure timely appointments or use the app due to lack of proficiency in Hebrew, many Palestinians in Jerusalem have resorted to seeking legal aid, paying up to $500 to have help simply to book appointments or fill out applications.

Those who can resort to hiring private lawyers pay fees of around $5,000 for restoring their residency status, and about $10,000 to register a large number of children.

For those who can’t pay, there are organisations like the Community Action Center in occupied East Jerusalem offering free legal aid to Palestinians in Jerusalem.

Mohammad al-Shihabi, who heads the centre, can list endless examples of those who have come for help over intentionally difficult Israeli bureaucratic procedures.

Most of the cases, he said, involve registering children, and “family reunification,” a procedure that Israel obliges Palestinians from East Jerusalem who marry Palestinians from the West Bank, or those who carry other nationalities, to undergo.

At the interior ministry branch office in Wadi al-Joz, he said Palestinians are subject to intense scrutiny, questioned as though by intelligence officials, and treated in an autocratic manner.

One couple whom he helped, who both carry Jerusalem residency, gave birth to their baby in the West Bank for reasons out of their control, but ministry officials rejected their request to register their child, Shihabi said. Their response to the mother, who was in tears, was: “He who is responsible for their mistake, deserves worse.”

Another example, he said, was a woman from East Jerusalem who lived with her Gazan husband in Gaza until the couple got a divorce in 1994. When she returned to Jerusalem with one of her children, Israeli officials refused to grant her residency because she had been living in Gaza.

Until today, she lives in the city without an ID, bank account or health insurance, despite the fact that she owns two homes in Jerusalem and has lived there for 25 consecutive years.

MEE attempted to interview several Palestinians living in East Jerusalem about their struggle with the interior ministry, but many refused, citing fear of repercussions.

Rami Saleh, the head of the Jerusalem Legal Aid Center and Human Rights Center, said that between 2013 and 2018, 7,236 requests for child registration made at the Wadi al-Joz branch were approved out of a total 9,966, according to figures provided to him by the ministry.

The rest, they told him, were under review. And, out of a total 3,236 family reunification requests, only 1,534 were approved.

Saleh told MEE that he reached out to the ministry to ask why only one branch provides services to hundreds of thousands of Palestinian residents, while Israeli residents of Jerusalem can go to any branch across the country and receive services swiftly.

Their response to him, he said, was that the employees at the ministry’s branch in Wadi al-Joz were more experienced in dealing with temporary residents.

Earlier this year, Israeli authorities opened another ministry branch at the Qalandia military checkpoint separating the West Bank city of Ramallah from Jerusalem. But the services provided there are limited in scope and are only offered at specific days and times.

An Israeli interior ministry spokesperson told MEE they are aware of the issues at the Wadi al-Joz branch and said they have tried to ease the situation over the past two years, including providing services at the Qalandia office and allowing for booking through the app, which she said provides appointment options within weeks, not months.

She also said the ministry is considering opening another office in East Jerusalem.

“We really care about this issue and we are working to find solutions so the residents of East Jerusalem can get better and faster service,” the spokesperson said in an email.

But Erez, the lawyer with HaMoked, said the changes that have been made have not relieved the majority of the hurdles that Palestinians in East Jerusalem face.

Any Palestinians going to the Qalandia office, he pointed out, must pass through the checkpoint there twice – and even then it only offers a limited set of services.

In West Jerusalem, which has less crowded ministry branches and where the High Court ordered the ministry to provide services to Palestinians from East Jerusalem, the branches have yet to make substantial changes, he said.

Most services, including renewing residency IDs and registering children, are not provided, employees don’t speak Arabic and many of them, unaware of the court order, end up sending Palestinians back to the Wadi al-Joz branch.

Saleh said it’s no shock to him that nothing has changed on the ground, despite efforts in court.

“It is no surprise that they are rejecting calls to improve conditions for Palestinians,” he said.

“We are dealing with a colonial entity that aims to exhaust Palestinian Jerusalemites, not to ease restrictions for them.”