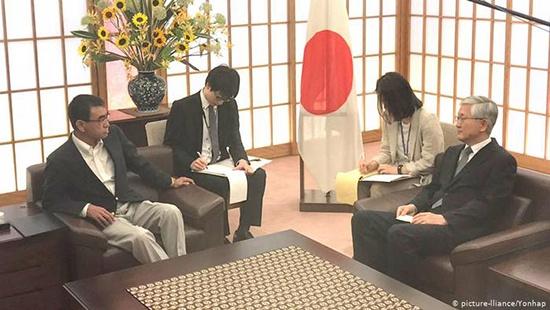 Japan’s Foreign Ministry has summoned the South Korean ambassador amid a deepening diplomatic dispute over wartime compensation. Earlier, an elderly man set himself on fire in protest outside Japan’s embassy in Seoul.

Tono cited “severe conditions of Japan-South Korea relations caused by the South Korean side,” according to the Kyodo news service.

The two countries are at odds over a South Korean court decision ordering Japanese companies to compensate South Korean victims of forced labor during Japan’s occupation of the country from 1910 to 1945.

Japan has said that all compensation issues have already been settled under a 1965 bilateral treaty. Tokyo claims the fact that the South Korean government has not intervened in the court process represents a breach of the agreement.

South Korea has accused Japan of weaponizing trade in response to the court rulings. Japan has tightened controls on sensitive high-tech exports to South Korea, a move that could affect South Korean manufacturers, including smartphone companies.

Meanwhile, an elderly man set himself alight in a car that was parked outside the Japanese Embassy in Seoul. Police said he later died in hospital.

The 78-year-old man’s father-in-law was believed to have been be a victim of forced labor by Japanese firms during World War II.

Police and fire officials both declined to comment on his possible motives, citing the fact that investigations were ongoing.