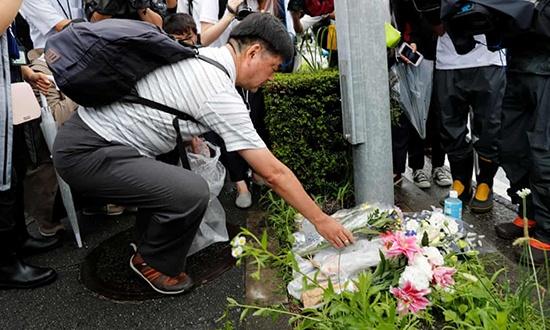 Gavin Blair in Tokyo and agencies  – The Guardian

Japan has been plunged into a state of shock after an arson attack on a popular anime studio killed at least 33 people as investigators searched for a motive and clues as to why the fire proved so deadly.

Thirty-six others were injured, some of them critically, in Thursday’s blaze at Kyoto Animation, which is Japan’s deadliest fire in nearly two decades.

Everyone from Anime fans to prime minister Shinzo Abe expressed anger, prayed and mourned the Kyoto victims on social media and a crowdfunding appeal set up to support the company and victims – who remain unidentified – has also gathered more than $1m in pledges.

The suspect, an unidentified 41-year-old man who did not work for the studio, shouted that he had been plagiarised and appeared to have planned the attack, Japanese media reports said on Friday. A woman who saw the suspect being detained told reporters he “seemed to be discontented, he seemed to get angry, shouting something about how he had been plagiarised”.

Survivors said he was screaming “you die!” as he sprayed what emergency services officials called an unidentified liquid accelerant. They said some of the survivors were splashed with the liquid. The suspect was injured in the attack and is being treated in hospital.

NHK footage also showed sharp knives police had collected from the scene, though it was not clear if they belonged to the attacker.

Earlier, Hideaki Hatta, the chief executive of Kyoto Animation, said the company had recently received emails containing death threats, though it was unclear whether they related to Thursday’s attack. “They were addressed to our office and sales department and told us to die,” he said. “I am heartbroken. It is unbearable that the people who helped carry Japan’s animation industry were hurt and lost their lives in this way.”

The fire appeared to have been set near the front door with some kind of flammable liquid, police said, forcing people to scramble up the stairs to the roof. Of the 33 bodies found by firefighters, 20 were on the third floor and some on the stairs to the roof, where they had apparently collapsed, Kyoto fire official Kazuhiro Hayashi said. Two were found dead on the first floor, 11 others on the second floor, he said.

The building has a spiral staircase that might have allowed flames and smoke to rise quickly to the top floor, broadcaster NHK noted. Yuji Hasemi, a fire expert at Waseda University, told NHK that paper drawings and other documents in the studio also might have contributed to the fire’s rapid spread.

The suspected arsonist started the fire in Japan’s ancient capital on Thursday morning when about 70 people had gathered for their day’s work at the three-storey building.

“There was an explosion, then I heard people shouting, some asking for help,” a witness told TBS TV. “Black smoke was rising from windows on upper floors. Then there was a man struggling to crawl out of the window.”

Most of the victims were employees of Kyoto Animation, which does work on movies and TV productions but is best known for its mega-hit stories featuring high school girls. The tales are so popular that fans make pilgrimages to some of the places depicted.

Kyoto Animation, better known as KyoAni, was founded in 1981 as an animation and comic book production studio, and its hits include Lucky Star in 2008, K-On! in 2011 and Haruhi Suzumiya in 2009.

The company does not have a major presence outside Japan, though it was hired to do secondary animation work on a 1998 Pokemon feature that appeared in US cinemas and a Winnie the Pooh video.

Violent crime is rare in Japan, though it is not unknown. In July 2016, a mass stabbing at a care home by a former employee killed 16 and injured more. In September 2001, a fire at a building in the Kabukicho entertainment district of central Tokyo killed 44. Arson was suspected, but nobody was ever charged, meaning the Kyoto Animation attack is the worst confirmed mass murder in Japan’s post-war history.