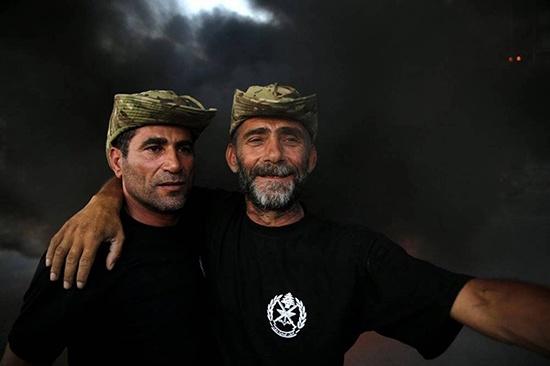 After the protests, the parliament speaker adjourned the evening session and postponed the vote until Friday.

BEIRUT: Dozens of protesters scuffled with Lebanese security forces guarding the country’s parliament Thursday just as lawmakers were meeting ahead of a final vote on a controversial austerity budget.

The protesters, most of them army veterans, were pushed back and moved down the road, where they burned tires and blocked traffic in the already heavily cordoned off area outside parliament.

The protesters had been camped outside parliament for three days when the draft bill returned to the 128-member parliament and members began their final discussion on whether to ratify the bill.

After the protests, the parliament speaker adjourned the evening session and postponed the vote until Friday.

The austerity budget is designed to avert a financial crisis in heavily indebted Lebanon. But it has fallen short of expectations among many lawmakers and the public who said it mainly focused on reducing public spending and raising taxes instead of tackling structural reforms, issues of governance and corruption.

“We tell the parliament you are being unfair to the soldiers. The soldiers’ rights are a red line. This is an issue of rights and dignity,” Gen. Mounir Akel told The Associated Press. “We ask them to drop the articles related to the soldiers because we can’t predicted what may happen. We can no longer calm the street.”

The proposed budget aims to reduce the projected deficit to 7.6% of the gross domestic product, down from 11.5% last year. The corruption-plagued country’s public debt is 150% of the GDP, among the largest in the world, and there have been serious concerns about an economic crash.

The budget was approved by the government in late May and despite the criticism is expected to pass in parliament.

Roads leading to the parliament building in downtown Beirut were closed since Tuesday and roadblocks and checkpoints were set up as the parliament convened.

On Thursday, the voting on each article of the draft bill was widely expected to begin in the afternoon session. The scuffles broke out as the finance minister took to the podium to defend the budget. The prime minister then took to the floor while the defense minister went out to meet with the protesters. The parliament speaker then stopped the live podcast and minutes later announced a new session would convene Friday afternoon.

Besides the protests, lawmakers must tackle another issue: They can’t vote on the budget before addressing constitutional provisions that require them to ratify the closure of accounts of the previous year’s budget.

The Cabinet has not been unable to convene for days, however, following bloody clashes among rival factions within the government, and it hasn’t submitted the accounts to parliament. So before lawmakers can vote on the budget, they must agree on amending the provisions to give the government more time.