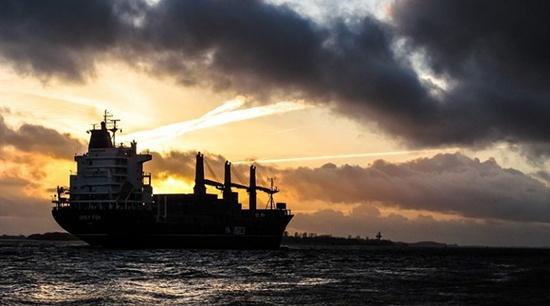 President Donald Trump said the U.S. “immediately destroyed” an Iranian drone that approached the USS Boxer near the Strait of Hormuz, the latest sign of escalating military tensions around the critical oil chokepoint.

The drone was a threat to the ship and its crew, Trump said at the White House on Thursday. The president said he’s calling “on other nations to protect their ships as they go through the Strait.” The Boxer is an amphibious assault ship.

“The Boxer took defensive action against an Iranian drone which had closed into a very, very near distance — approximately 1,000 yards, ignoring multiple calls to stand down and was threatening the safety of the ship and the ship’s crew,” Trump said.

Oil futures in New York traded at $55.80 a barrel in early Asia trading, up 50 cents from Thursday’s close.

Pentagon spokesman Jonathan Hoffman said in a statement that the Boxer “was in international waters conducting a planned inbound transit of the Strait of Hormuz” when a drone “closed within a threatening range” and “the ship took defensive action.”

The confrontation comes as tensions between Washington and Tehran remain high over a spate of attacks on cargo ships, the downing of an American drone and the British seizure of a tanker carrying Iranian oil.

Earlier in the day, the U.S. condemned Iranian naval activity in the Persian Gulf and demanded that the Islamic Republic release a small tanker and its crew that its forces seized this week. A State Department official who asked not to be identified discussing the issue cited the Islamic Revolutionary Guard Corps’ “continued harassment” of vessels in and around the Strait.

Iranian Foreign Minister Mohammad Javad Zarif said in an interview with Bloomberg News on Wednesday that said his country is capable of shutting the Strait of Hormuz, but doesn’t want to do so.

“We certainly have the ability to do it, but we certainly don’t want to do it because the Strait of Hormuz and the Persian Gulf are our lifeline,” Zarif said in New York. “It has to be secured. We play a big role in securing it, but it has to be secure for everybody.”

About one-third of the world’s seaborne crude and fuels passed through the Strait of Hormuz last year, highlighting its key role in global oil markets. In May and June, six tankers were attacked in the region. While Iran has been blamed for attacks on merchant shipping, it has denied responsibility.

“It’s dangerous because it is very crowded,” Zarif said, adding that the last time the area was this crowded, the U.S. shot down an Iranian commercial airliner with 290 passengers in 1988. “We feel the danger and that is why we want to avoid a dangerous escalation, but we cannot give up defending our country.”

Iran and the U.S. have been at loggerheads since last year, when Trump withdrew the U.S. from the 2015 nuclear agreement he called the “worst deal ever.” In May, the administration refused to extend waivers to eight governments for Iranian oil purchases, ratcheting up the pressure on the country’s already battered economy.

Speaking to reporters in New York on Thursday, Zarif said he had made a “substantial” offer to break the impasse with the U.S. While Trump administration officials have said they are willing to meet Iranian leaders without preconditions, Secretary of State Michael Pompeo has laid out a series of demands — including ending support for proxy militias in other countries — he says Iran must adhere to before sanctions are lifted. Iran wants some easing of sanctions first.

In the meantime, Iran has proceeded with efforts to enrich uranium beyond limits proscribed by the 2015 accord.

A Trump administration official, asking not to be identified, said a “serious gesture” on Iran’s part would involve ending uranium enrichment immediately and move toward ending ballistic missile development. Zarif and other officials have said they won’t bargain away the right to have missiles for defensive purposes.