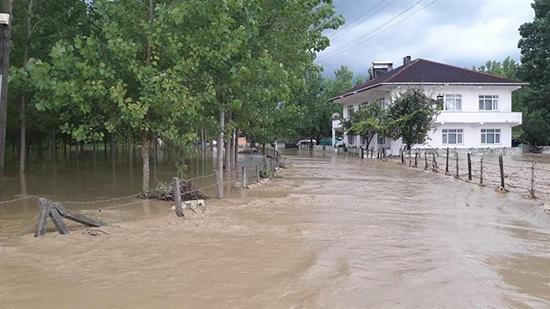 Flash flood on July 17 stranded many people in northwestern Turkey after blocking roads and causing heavy damage to the buildings.

Cumayeri, a district of the northwestern Düzce province, was hit by heavy rainfall which triggered landslides and blocked the roads to the villages.

Eight people, who were stuck in a rafting facility, were rescued by a helicopter, which landed in the Sakarya province located near Düzce, due to adverse air condition in the latter.

Two of the rescued people were learned to have fractures in their bodies, while the others survived the floods without injury.

“It was a moment when human faces death,” Davut Pirdal, operator of the rafting facility, told Anadolu Agency.

The flood completely destroyed the facility, he said, adding that over 10 cattle were drowned in the disaster.

İsa Keleş, Anadolu Agency’s Cumayeri correspondent who went to the scene to cover the incident, was also among the people rescued from the area.

Keleş said that they first took shelter under a roof, but later they had to climb to the top of the roof as the water level kept increasing.

Also, 21 people working at hazelnut farms in Dilaver village of Düzce were stranded in their houses due to heavy rainfall.

Düzce Governor Zülkif Dağlı told Anadolu Agency that the workers coming from southeastern provinces to work at the farmlands were also rescued by a helicopter.

Dağlı also said at least 56 people have been rescued from the different parts of the city so far.

Hasan Ani, one of the workers coming from Şırnak province, said that they were stranded since last night, but they are fine now.

Also in Akçakoca district, heavy rainfall caused stream flooding, which made it impossible for people residing in villages to reach the city center.

The villagers are being evacuated to the city center by helicopters, according to Hakan Öztaş, deputy mayor of Akcakoca.

“Rain has slowed down now. […] Some vehicles are dragged to the sea,” he said.