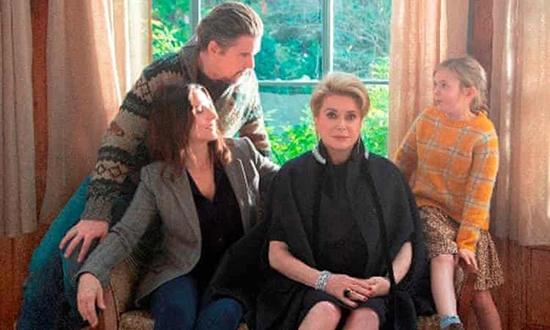 Palme d’Or winner’s new film starring Catherine Deneuve to kick off the Venice film festival, while Toronto gets a documentary about the legendary folk-rockers

The Truth, the new film from multi-award-winning Japanese director Hirokazu Kore-eda, will open the 2019 edition of the Venice film festival.

Filmed in French and English, and starring Catherine Deneuve, Juliette Binoche and Ethan Hawke, The Truth is described by festival director Alberto Barbera as “a poetic reflection on the relationship between a mother and her daughter, and the complex profession of acting”. Deneuve plays a legendary star of French cinema whose daughter (Binoche) returns to Paris. According to the film’s synopsis, the “reunion between mother and daughter will quickly turn to confrontation: truths will be told, accounts settled, loves and resentments confessed”.

The Truth is Kore-eda’s first non-Japanese language production, and his first film since winning the Palme d’Or at Cannes in 2018 for Shoplifters. In a statement Kore-eda said: “The cast is prestigious but the film itself recounts a small family story that takes place primarily inside a house. I have tried to make my characters live within this small universe, with their lies, pride, regrets, sadness, joy, and reconciliation.”

The Toronto film festival, which runs near-simultaneously to Venice, has also announced its opening film. The North American festival will kick off with the world premiere of Once Were Brothers: Robbie Robertson and The Band, a documentary profile of the folk-rock outfit best known as Bob Dylan’s back-up band in the mid-1960s. Their final performance was filmed by Martin Scorsese in 1976 in The Last Waltz. Robertson, one of the Band’s most prominent members, was born and brought up in Toronto.

Cameron Bailey, the festival’s artistic director, said in a statement: “This is one of Toronto’s great stories of a hometown hero. From his early years in this city, to the inspiration he took from life on the Six Nations reserve, to the impact he’s had on generations of music lovers, Robertson emerges … as a truly Canadian-made superstar.”

Robertson said he was “so tremendously honoured” that the film was selected.

The Truth will have its world premiere on 28 August, the opening day of the Venice film festival, which runs until 7 September, while Once Were Brothers screens on 5 September, with Toronto continuing until 15 September.