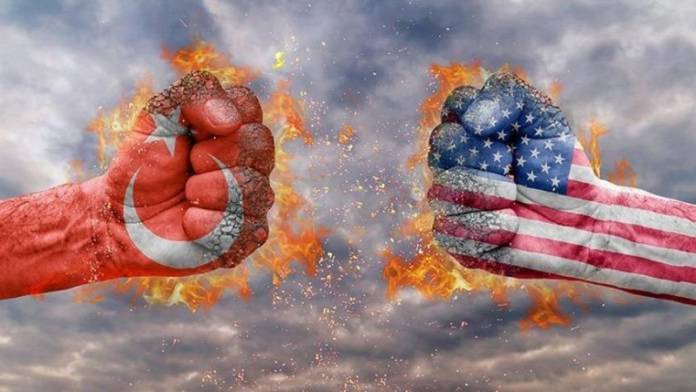 sozcu.com.tr –  Turan -President Erdogan caused the deepest crisis in relations between Turkey and the United States since the days of the Cold War and between Turkey and NATO – after 1952. Despite the persistence of Washington and Brussels, the Turkish president did not retreat, and last week Russian S-400 missiles were sent to Murted air base near Ankara.

There is no doubt that taking an unprecedented step in the history of alliances, President Erdogan and other persons in the leadership of the Turkey deeply analyzed many sensitive issues.

So, the benefits of buying S-400 missiles exceeded the costs, and therefore Ankara did not abandon such an important and at the same time risky step. Undoubtedly, Turkey carefully studied the scenarios by which events can develop. Perhaps that is why President Erdogan from the very beginning, trying not to heat up the atmosphere, kept saying: “We are not preparing for war. We ensure our national security and peace. The acquisition of the S-400 was a necessity. ” That is, from the very beginning it was important not to cause such a deep indignation of Washington.

In this situation, the leadership of Turkey, headed by President Erdogan, has correctly chosen the “policy of not raising the voice”. Moreover, two days ago, Secretary of State Mike Pompeo hinted at the possibility of imposing tough sanctions: “Laws require sanctions. I am confident that President Trump, like us, will follow the laws” (the talk is about the sanctions “Sanctions applied against hostile states”). Acting Secretary of Defense Mark Esper, for whose appointment Minister Trump sent a presentation to Congress, expressed an even more specific attitude to the issue: “Turkey is a long-standing and important ally, but its desire to get the S-400 undermines the security of Turkey and NATO … it cannot have both the C-400 and the F-35 at the same time” https://tass.ru/mezhdunarodnaya-panorama/6669598.

In conditions when Ankara is trying to keep the current situation under stability, and Washington is completely dissatisfied with the current state of affairs, Turkey will probably try to take measures in accordance with the nature of the expected sanctions.

What sanctions can Washington apply to Ankara? If the talk is about “Sanctions applied against hostile states, then can their list be open? Which areas will cover sanctions: economy, bilateral and military ties with NATO, diplomatic relations? Turkey may foresee them, but unexpected sanctions may appear on the agenda.

Therefore, it is necessary to wait for the events of the coming days, but it would be nice to probe the Russian front as well. During the Cold War years, there could be no question of the USSR selling weapons or even establishing simple ties with any NATO country. But in a unipolar world, we see Russia selling weapons to a NATO country. This sale can be considered an important stage in Moscow”s expectations regarding Ankara. But can this be considered also Moscow”s biggest or last wish?

No, not at all! Earlier, we wrote that the sale of Ankara S-400 Moscow solves several issues at once. Moreover, Russia so much praised and increased the price of rockets delivered since last week, as if it shows Turkey the highest mercy in history (propaganda in Turkey is conducted in the same direction).

Yes, Turkey desperately needs air defense missiles and, despite all the controversy, the S-400 adequately covers this need. However, they forget that Ankara did a lot for Russia, which was forced out of many parts of the world, to get access to the Mediterranean Sea and into Europe (for example, nuclear power plants to Akkuyu, the Turkish Stream gas pipeline, etc.). Will Moscow still want something else from Ankara after the end of C-400 deliveries?

Of course it will! We can even guess that the basic wishes will begin after that. As long as Russia does not abandon plans to export its natural gas to the countries of the Mediterranean, it will need the support of Turkey. And there is nothing wrong in our statement that from this point of view, Turkey is of paramount importance for Russia. Therefore, waiting for news from overseas, it would be useful to be prepared for what may come from Moscow.