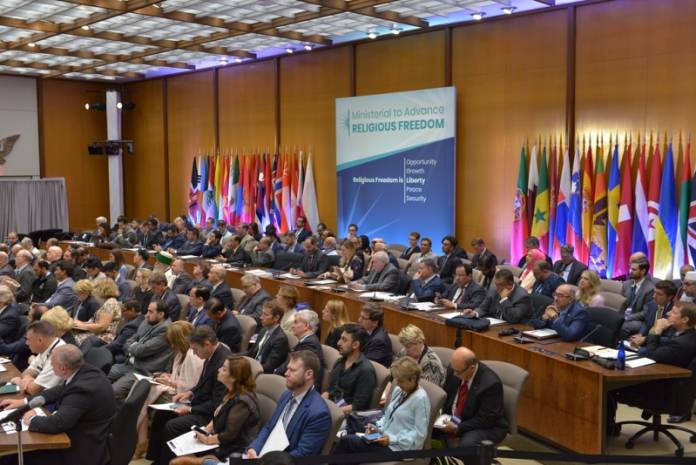 Washington/20.07.19/Turan: Azerbaijan on Thursday became the only South Caucasian country which refused to sign a key U.S.-backed statement in support of the interconnected freedoms of thought, conscience, religion or belief, and expression, TURAN’s U.S. correspondent Alex Raufoglu reports.

On the last day of the three-day Ministerial to Advance Religious Freedom, hosted at the State Department and dubbed the “largest religious freedom event ever,” U.S. Vice President Michael Pence and Secretary of State Mike Pompeo each addressed hundreds of ministers, religious leaders, and activists from 106 nations, to celebrate the “unalienable rights” of religious freedom, and to “turn convictions to action.”

Azerbaijan was represented by the Chairman of the State Committee on Religious Associations, Mubariz Gurbanli, while Armenian delegation was lead by the Zohrab Mnatsakanyan, the country’s country’s foreign affairs minister.

The U.S. government presented 9 Statements of Concern to the country delegations at the meeting.

Among them were statements on Counter-terrorism; on Burma – Myanmar; on China, Not State Actors, on Protecting Places of Worship and several others. Participating countries were given the opportunity to join the Statements of Concern to demonstrate their shared concern on the key issues.

While Azerbaijan did co-sign 4 of 9 statements, including the one condemning the systematic, ongoing, and egregious abuses of religious freedom perpetrated by terrorist and extremist groups, it also raised eyebrows by refusing to sign the statement on Blasphemy and Apostasy Laws. Other South Caucasus countries, Georgia and Armenia, have joined the statement.

“As representatives of the international community, we stand together in support of the interconnected freedoms of thought, conscience, religion or belief,and expression,” reads the statement. “Numerous countries maintain laws criminalizing blasphemy, apostasy, or speech that might “defame” or “insult”religious sentiments. Such laws are often used as a pretext to justify vigilantism or mob violence in the name of religion,or as a pretext to pursue retribution related to personal grievances. We see governments using such laws to wrongfully imprison and punish individuals whose views on matters of religion or belief may differ from official narratives or the views of majority populations. We call on governments that utilize these laws to free any individuals imprisoned on such grounds, and to repeal blasphemy,apostasy, and other laws that impede the exercise of freedoms of expression and religion or belief, in a manner inconsistent with international law. We remain committed to working with partners to combat problems like sectarianism, discrimination,and violence based on religious intolerance in ways that respect fundamental freedoms,including freedom of thought, conscience, religion or belief and freedom of expression.”

Another document that Azerbaijan refused to sign is named “the Statement on Counterterrorism as a Pretext for the Repression of Religious Freedom.”

“While underscoring the necessity of effective, human rights-respecting counterterrorism and other security measures, we deplore the application by states for political purposes of any laws, policies and practices to target those seeking to exercise religious freedom and other civil and political rights,” reads the statement.

“Security tactics that violate human rights have been demonstrated to strengthen and validate, rather than prevent, terrorist recruitment and radicalization. We commit ourselves to continue supporting persons and communities that have been subject to terrorist violence and to holding the perpetrators of terrorism accountable using policies, practices, and laws that comply with international law and standards.”

In the meantime, about 30 participant countries, including Azerbaijan, co–signed another key statement to recognize that religious communities of all traditions can be powerful, peaceful forces for good in the world. “We call upon all governments to respect the individual”s human right to believe or not believe, to practice any faith tradition or none. We celebrate the good of religion manifested in countless selfless acts of service, compassion and charity across the globe, and condemn horrific acts committed in the name of religion.”

Baku also joined the statement on the abuse of members of religions by non-state actors, as well as a statement on protecting places of worship.

“Religious persecution is a concern for the entire global community”, Vice President Mike Pence and Secretary of State Mike Pompeo told the participants.

Pompeo in his final speech said that it is time to “turn our convictions into action,” and announced two initiatives. First, the State Department has established an International Religious Freedom Fund-a multi-donor fund that provides rapid assistance to victims of persecution all throughout the world. “It”s already serving good, and its purpose around the world is expanding.”

Another initiative is to create an International Religious Freedom Alliance. “We hope that this new vehicle-the first ever international body devoted to this specific topic-will build on efforts to date and bring like minded countries together to confront challenges of international religious freedom.”

Albania, Colombia, Morocco, and the Vatican will host regional conferences in the near future.