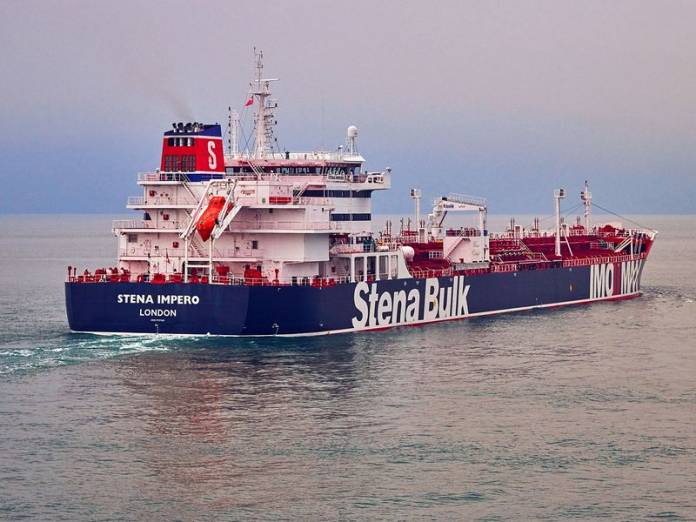 Iran’s Revolutionary Guard Corps seized a British oil tanker and a Liberian-flagged ship in the Strait of Hormuz amid soaring tensions in one of the world’s critical energy chokepoints. U.K. officials demanded the immediate release of the vessels, one of which later left Iranian waters.

Brent futures climbed as much as 1.4% on the news.

U.K. Foreign Secretary Jeremy Hunt and other top British officials held an emergency meeting on Friday evening over the capture of the two vessels. Afterward, the Foreign Office said in a statement that “our response will be considered and robust and there will be serious consequences if the situation is not resolved.”

The office added that “we have advised U.K. shipping to stay out of the area for an interim period.”

In Washington, President Donald Trump said he will be “working with the U.K.” and suggested the latest developments justify his harsher approach toward Tehran. “This only goes to show what I’m saying about Iran: trouble, nothing but trouble.”

On Friday night, U.S. Central Command announced it was putting in place “a multinational maritime effort” called Operation Sentinel that would “increase surveillance of and security in key waterways in the Middle East to ensure freedom of navigation in light of recent events in the Arabian Gulf region.”

A spokesman for Iran’s Guardian Council suggested earlier Friday that the move against at least one of the ships was in retaliation for the British seizure, off Gibraltar, of a tanker carrying Iranian crude earlier this month. U.K. authorities said that ship was heading toward Syria in violation of sanctions. Iran’s government rejected that charge, but wouldn’t say where the tanker was going.

Earlier Friday, a court in Gibraltar ordered the continued detention of the vessel, the Grace 1, for another 30 days, according to news reports.

“The rule of retaliation is something that’s recognized within international law and is used in relation to wrong measures taken by a government,” Guardian Council spokesman Abbasali Kadkhodaei told the state-run Islamic Republic News Agency.

The second ship, the Liberian-flagged Mesdar, re-established contact with it’s U.K.-based manager and was reported to be moving away from the Iranian coast toward international waters.

Separately, both the semi-official Fars News agency and Tasnim news said the Mesdar wasn’t under Iranian control. Citing military sources it didn’t identify, Tasnim said the Mesdar “was only briefed on requirements for safe navigation and the observance of environmental regulations and allows to continue on its course.”

State television said that the vessel had not been seized.

The latest developments appeared to damage hopes hours earlier that tensions between the U.S. and Iran could possibly be lowered through negotiations. An American official earlier in the day said the administration wants to hear directly from Iranian President Hassan Rouhani or Ayatollah Ali Khamenei, the country’s supreme leader, about whether the Islamic Republic is interested in negotiations.

That followed comments by Foreign Minister Mohammad Javad Zarif that appeared to signal a willingness to talk under specific conditions.

“We should form an international coalition of democratic countries to escort every single commercial vessel through the gulf,” Burns said in an interview in Colorado. “The Iranians are an outlaw, they’re acting like an outlaw country, they’re trying to shut down one of the major waterways in the world and then hold us up on it and blackmail us.”

After the U.K. tanker Stena Impero was escorted into Iranian waters, the Mesdar appeared to turn toward the Iranian coast, according to ship-tracking data. The ship, operated by a U.K. company, had been heading toward Saudi Arabia.

Allahmorad Afifipour, the head of the Ports and Maritime Organization in Iran’s Hormozgan province, said the group had received reports the first tanker “had an incident with another vessel,” but offered no specifics. He said the ship was empty and “destined for one of the Persian Gulf littoral states.”

The Stena Impero is owned by Stena Bulk and managed by Northern Marine Management, based in Clydebank, Scotland. Both companies are subsidiaries of Swedish-based Stena AB. The Mesdar is owned by a U.K. subsidiary of Algerian oil company Sonatrach Group.

Friday’s incidents marked at least the second Iranian move against a U.K. ship in just over a week. On July 11, the British Navy intervened to stop Iran from blocking a commercial oil tanker leaving the Persian Gulf.

The tit-for-tat actions signal greater instability and potential conflict in a region where one-third of the world’s seaborne crude and fuels pass through. The U.S. and Iran have been locked in a standoff over American sanctions on Iranian oil following Trump’s withdrawal from the 2015 nuclear accord last year.

“These incidents in isolation are not especially alarming,” former U.S. National Security Adviser Susan Rice said at a conference in Aspen, Colorado. But, she added, “in the aggregate they are, given that we’re dealing with players that have little interest in de-escalating.”

Recent weeks have seen a spate of attacks on oil tankers and other flare ups in the Gulf region. On Thursday, the U.S. said it shot down an Iranian drone that was endangering the Navy ship USS Boxer, a claim Iran has rejected. In June, Trump said he called off a retaliatory strike on Iran following Tehran’s shooting down of an American drone.

On Friday, the Swedish owner of the Stena Impero said the ship “was approached by unidentified small crafts and a helicopter during transit of the Strait of Hormuz while the vessel was in international waters” at about 4 p.m. London time. “We are presently unable to contact the vessel which is now heading north towards Iran.”

The 49,683 deadweight ton tanker, which has 23 workers aboard and typically carries refined products, was last heading to Jubail, Saudi Arabia, according to ship-tracking data.

Following the Gibraltar seizure earlier this month, British forces had been escorting ships that were flying the nation’s flag, and it appeared oil tankers registered in the Isle of Man, Gibraltar and the U.K. had largely left the Gulf.

(Updates with Iran’s denial of seizing one of the vessels in 12th paragraph.)