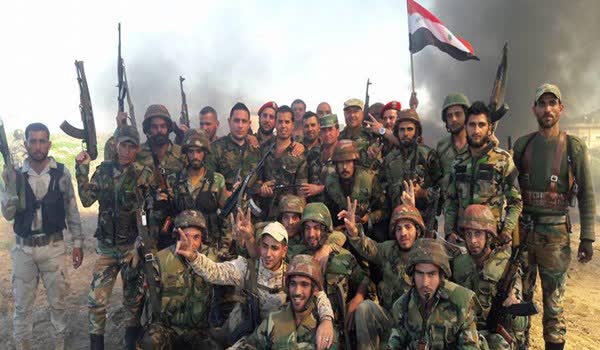 TEHRAN (FNA)- The Syrian Army troops warded off terrorists’ massive attacks on the strategic region of Sahl al-Ghab in Northwestern Hama as Tahrir al-Sham al-Hay’at (the Levant Liberation Board or the Al-Nusra Front) has sent hundreds more militants to the region.

The pro-militant Arabic-language Anab Baladi news website reported that about 500 Tahrir al-Sham terrorists and other terrorists of al-Fath al-Mobin Operations Room have been sen t to Sahl al-Ghab region in Northwestern Hama.

Meantime, the Syrian Army troops engaged in fierce clashes with the terrorists who had attacked the government forces’ military positions in the town of al-Qasabieh in Northern Hama and fended off their attacks after destroying their military and armored vehicles as well as killing a large number of terrorists.

Meantime, four civilians were killed and injured in terrorists’ rocket attacks on New Aleppo district in the city of Aleppo.

In a relevant development on Wednesday, the Arabic-language media outlets reported that the terrorist groups destroyed a crucial bridge in Sahl al-Ghab region in Northwestern Hama to prevent the Syrian Army troops from making further advances there.

The Arabic-language website of the Russian Sputnik News Agency quoted local sources in Northern Hama as saying that the terrorist groups stationed in Sahl al-Ghab annihilated Jasr Beit al-Ra’as Bridge which is linked to the areas under the Syrian Army’s control.

Meantime, the Syrian Army’s artillery and missile units attacked the military positions of Tahrir al-Sham al-Hay’at (the Levant Liberation Board or the Al-Nusra Front) and Islamic Turkistani Party in several regions of Northern Hama and Southern Idlib.

The Syrian Army destroyed a number of military positions and centers of the terrorists in Northern Hama and Southern Idlib, inflicting heavy losses on them.

Meantime, battlefield source reported that the Syrian Army has dispatched a massive military convoy comprising tens of military vehicles, tanks and heavy canons along with their troops to Jourin military base in Northwestern Hama.