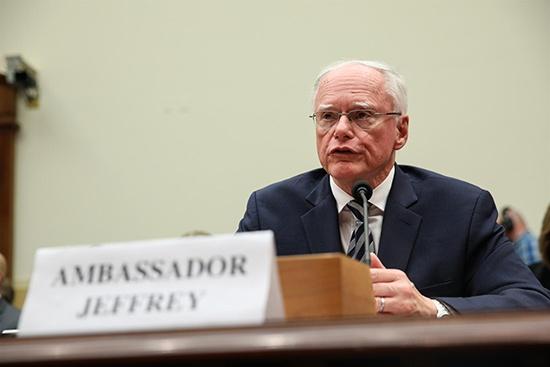 Senior diplomats and military officials from Turkey and the United States will meet in the Turkish capital on July 22 to continue negotiations for setting up a safe zone along the Turkish-Syrian border amid strained ties over the former’s deployment of Russian S-400 air defense systems.

The priority will be given to joint efforts to set up a safe zone in northeastern Syria in order to protect the Turkish borders from the YPG/PYD terror group, an offshoot of the PKK in the Syrian territories. The idea is to create a terror-free zone along this safe zone to be monitored and patrolled by Turkish and American troops.

The two sides had traded their vision and proposals in regards to the safe zone in May. There are still differences on the main points about the safe zone, and Jeffrey’s talks will focus on narrowing the gaps between the proposals.

Turkey wants to have full control of the safe zone after all the YPG troops are withdrawn and all their facilities are destroyed. The depth of the safe zone should be around 40 kilometers so that no YPG troops can attack on the Turkish border, Ankara says.

The United States, however, insists around 10 kilometers deep safe zone with no permanent deployment of the Turkish troops. There were reports that United States was in talks with European partners to create a coalition force for the control of the safe zone.

The talks come as Turkey and the United States are still at odds over the Turkish deployment of the S-400s from Russia which resulted in the cessation of Turkish participation in the F-35 aircraft program. The United States is nowadays pondering on further sanctions against Turkey under the CAATSA (Countering American Adversaries through Sanctions Act).

Foreign Minister Mevlüt Çavuşoğlu spoke on the phone with Secretary of State Mike Pompeo on July 20 and exchanged views about the S-400/F-35 tension as well as on Syriaand other bilateral issues.