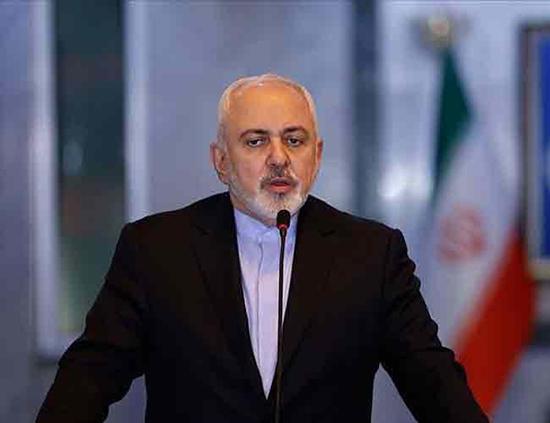 TEHRAN (FNA)- Iranian Foreign Minister Mohammad Javad Zarif warned that US Security Advisor John Bolton has now shifted its destructive policy towards luring London into his anti-Tehran policies after failing to convince US President Donald Trump to start a war on Iran.

In a tweet on Sunday, Zarif alluded to recent revelations about Bolton’s role in the seizure of an Iranian super oil tanker in the Strait of Gibraltar in early July, and said “Bolton has failed to lure Trump into the War of the Century”, a military campaign against Iran, and fearing collapse of his B-Team, “Bolton is turning his venom against the UK in hopes of dragging it into a quagmire”.

The top diplomat advised American and British officials to act prudently as he added that “only prudence and foresight can thwart such ploys”.

His tweet came after the Guardian revealed in a piece by Simon Tisdall that the UK was set up by the US in the case of the seizure of the Iranian oil tanker in the Strait of the Gibraltar.

“But accumulating evidence suggests,” Tisdall wrote, “that Bolton’s national security team was directly involved in manufacturing the Gibraltar incident. The suspicion is that Conservative politicians, distracted by picking a new prime minister, jockeying for power, and preoccupied with Brexit, stumbled into an American trap.”

“The consequences of the Gibraltar affair are only now becoming clear. The seizure of Grace I led directly to Friday’s capture” of a UK-flagged tanker in the Strait of Hormuz, according to the Guardian.

Earleir on the day, Iranian Ambassador to London Hamid Baeidinejad advised the British government to be wary of those internal elements trying to further escalate tensions between Tehran and London, reassuring that, however, the Islamic Republic is not afraid of the worsening of the situation.

“The UK government should contain those domestic political forces who want to escalate existing tensions between Iran and the UK well beyond the issue of ships,” Baeidinejad wrote in a tweet on Sunday, after some in the UK started to magnify the seizure of the UK-flagged tanker.

“This is quite dangerous and unwise at a sensitive time in the region. Iran however is firm and ready for different scenarios,” the envoy underlined.

The IRGC impounded Stena Impero on Friday when it was passing through the Strait of Hormuz en route to Saudi Arabia “for failing to respect international maritime rules”.

“UK tanker ship, Stena Impero, has been detained by the vessels unit of the IRGC Navy’s First Naval Zone at the request of the Ports and Maritime Organization’s office of Hormuzgan province for disregarding international maritime rules and regulations as it was passing through the Strait of Hormuz this afternoon,” the statement by the IRGCN public relations said.

The statement added that the ship had been escorted to the Iranian coastal waters in Hormuzgan province and its control had been transferred to the Ports and Maritime Organization for further legal procedures and investigations.

A statement by Stena Impero shipping firm had announced there were 23 crew onboard the UK ship, stating that there had been no report on any harm or injury to the crew members since the vessel came under detention by the Iranian forces.

Director-General of the Ports and Maritime Organization’s office in Hurmuzgan province stated that he filed a request for the seizure of the British tanker by the IRGCN after reports on its risky moves that made the vessel prone to accident.

Sources told FNA that the British ship had switched off its tracking systems in violation of maritime rules and regulations and was making an entry from the exit point of the Strait of Hormuz in the South, disregarding the established procedures that require all entries be made through the Northern pass.

Director General of the Ports and Maritime Organization’s office of Hormuzgan province Allah Morad Afifipour stated Saturday that the British oil tanker was seized because it ignored calls from a fishing boat after an accident in the waterway.

“The British oil tanker, Stena Impero, had an accident with a fishing boat on its way and according to the law, the reason and other issues related to the accident should be studied,” Afifipour told FNA.

He added that sailors on the damaged fishing boat had contacted the British vessel, but the tanker had ignored their calls.

“When the British vessel did not respond to the fishing vessel, they informed Ports and Maritime Organization’s office of Hormuzgan province according to the legal procedures,” Afifipour said, noting that his office had requested the Judiciary and the IRGC to stop the British tanker.

Also, the UK owned tanker, MV Mesdar, operating under Liberian flag was stopped by Iran’s naval patrols in the Strait of Hormuz on Friday evening after it started oil leaks in the waterway.

The ship was sent back to the international waters to continue its voyage after a short time and after it was warned to show full respect for environmental regulations and harmless navigation.

Senior military officials also rejected reports by some western media outlets claiming that the Liberian-flagged tanker had been seized, stressing that ‘Stena Impero’ was the only foreign ship under Iranian custody.

In early July, British marines and Gibraltar police seized an Iranian tanker off the Southern coast of the Iberian Peninsula. Gibraltar’s Chief Minister Fabian Picardo claimed that the ship was transporting crude oil to Syria “in violation” of the EU sanctions placed on Damascus. Washington has applauded the move, hailing it as a sign that Europe is on board with the US’ unilateral sanctions against Iran.

The Iranian Foreign Ministry condemned the “illegal move” of London and described it as “tantamount to piracy”. Tehran accused the UK of doing Washington’s bidding and helping the US attempt to stifle the Islamic Republic’s oil exports, rejecting London’s claim that the supertanker was carrying crude for Syria.

The attorney general announced on Friday that Gibraltar’s supreme court has ruled that the Iranian tanker seized by Britain’s Royal Marines can be detained for 30 more days. The court’s decision came a day after a senior Gibraltar’s official described as “constructive” talks with Iran, raising hopes that the tanker would be released imminently.

Supreme Leader of the Islamic Revolution Ayatollah Seyed Ali Khamenei has slammed Britain’s illegal seizure of the oil tanker, warning London of a pending response to the seizure of the supertanker that he referred to as a case of “piracy”.

On Thursday, naval forces of the IRGC seized a foreign ship smuggling fuel in the Persian Gulf, according to a statement by the public relations office of the IRGC Navy’s first zone. The foreign vessel was smuggling a million liters of fuel from Iran and was seized in Iranian waters South of Lark island. Yet, a statement issued by the IRGC on Thursday denied that any other foreign ship had been seized during the last week as claimed by the western media. The statement reiterated that the ship had been seized for “smuggling fuel from Iran”, and no other reason.

The recent moves by foreign powers in the Middle East such as US sanctions on Tehran’s oil, UK seizure of Iranian supertanker, as well as, “sabotage operations” on oil ships have intensified the turmoil in the region and the turmoil in the international energy market, affecting global crude prices in recent months.