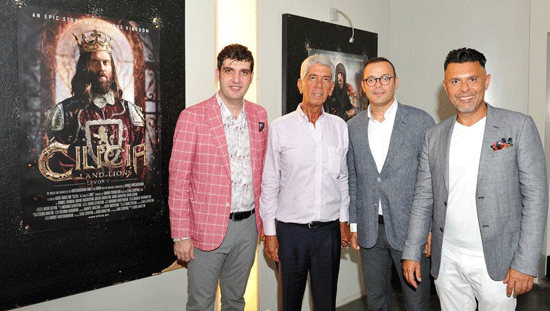 BEIRUT: “Cilicia: The Land of Lions” is the first cinematographic production about the ancient Armenian Kingdom of Cilicia whose creators aim to bring to the international film market.

Dozens gathered to witness the story of a glorious Kingdom that left a lasting mark on history, and that has a special significance within the Armenian culture.

The mood reel highlights one of the greatest chapters of the Armenian history in Asia Minor, the Kingdom of Cilicia, during its three-century-old existence (1080-1375), when Armenians resisted enemies, fought for liberation, created a princedom, and established a powerful kingdom.

The Khatchadourian Family, founders of the renowned KOHAR Symphony Orchestra and Choir, initiated this venture to contribute to the preservation and dissemination of the glorious history of the noble Armenian Kingdom of Cilicia.

What adds to the specialty of the production is its credible retelling of history.

“The world needs to know about the incredibly compelling existence The Kingdom of Cilicia has had within history,” Harout Khatchadourian, Lebanese-Armenian benefactor and founding member of KOHAR, told Annahar. “Up until now, there has not been any movie production perfectly depicting the power of this ancient kingdom. However, we will change that reality,” he continued.

Sevag Seropian, Director of the mood reel, said that over a thousand people have worked on the making of this project in the course of three years. “A history as rich as that of the Cilician Kingdom should not be overlooked,” Seropian said. “This production aims to reinforce the sense of cultural honor within the hearts of Armenians everywhere and to remind the world of the existence of a powerful ancient Armenian Kingdom,” he added.

The first mood reel from the trilogy is an introduction to the first period of the three-century-old history of Cilicia, starting from the foundation of a princedom in the 11th century to the rule of one of the greatest Armenian royals, King Levon the Roupenid. The main characters of the first mood reel are Prince Thoros II and Prince Levon II “Lord of the mountains,” who, after taking part in the Crusades, proclaimed Cilicia as a Kingdom and was subsequently crowned as King Levon I.

The second mood reel not only refers to historical facts, but also gives insight into the relationship among the nobles and the conflicts between them. These mainly revolve around the only heir to the Cilician throne, Zabel. With her marriage to Hetoum I, the son of the guardian of the throne, the Roupenid dynasty changed to Hetoumid, named after the new king.

The last mood reel presents the time when Cilicia, as a well-established Kingdom, had numerous cultural and diplomatic relations with Europe. Nevertheless, the constant hostile invasions began to gradually weaken the power of the Cilician Kingdom. The last of several fierce battles against the superior Mamluk forces was fatal; the Kingdom fell after three centuries of remarkable history. The last scene of the mood reel trilogy is the funeral of King Levon V, the last king of Cilicia, whose gravestone stands in the Basilica of Saint-Denis, France.

“This production should remind Armenians to hold on to their nation’s cause,” Nayiri Kradjian, an audience member, told Annahar. “We should all visit Cilicia and our occupied lands, even though they are now located under the Turkish regime, to witness and remember the glory of our nation and to never give up on our historical cause,” she added.