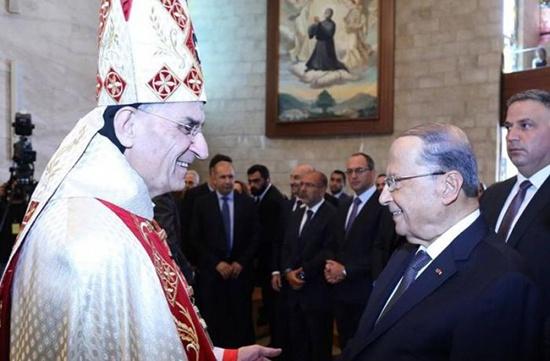 On the feast day of Saint Charbel, Card Al-Rahi criticises once more Lebanon’s political leaders. Praising the monk as a “model of unity”, he warns against the danger of “idolatry” of power and money, which create “dependency”. For him, it is necessary to “fight corruption from within”.

Beirut (AsiaNews) – Maronite patriarch Card Beshara Al-Rahi has issued a harsh warning to the Lebanon’s leaders on the occasion of the feast of Saint Charbel, which was celebrated on over the week-end across the country.

The prelate made his new appeal in the monastery of Saint Maron, Annaya, in front of President Michel Aoun, and then again in Kherbet Kanafar (western Bekaa) in front of lawmakers and municipal councillors.

Maronite bishop of Jbeil Michel Aoun and the president of the Lebanese Maronite Order Nabatae Allah Al-Hashem were also present at the ceremony celebrating the saint, model of unity.

In his address, the Maronite patriarch warned against the danger of “idolatry” that corrupt political power and the interferences that put justice at the mercy of the corrupt.

Addressing a crowd of pilgrims from across the country during Sunday morning Mass, the head of the Maronite Church mentioned the virtues and heroic journey of Saint Charbel, “the Lebanese saint par excellence”.

“Let us pray that the hand of Saint Charbel may cover us with his mantle, so that the face of Christ the Redeemer, who wanted to make us his witnesses in Lebanon and the East, be revealed to everyone,” the patriarch said in his homily.

The Maronite patriarch issued his strongest message in the Church of Saint Elijah, in Kherbet Kanafar, on the patron saint’s feast day (20 July), which coincides with the jubilee of the 150th anniversary of the foundation in 1869.

Speaking before local authorities, the cardinal stressed that “today there are many idols: power, money, weapons, self-worship,” not to mention “drugs, alcohol and prostitution” that create “dependency” and “undermine people’s natural beauty and corrupt their sense of morality.”

In parliament and in the government, “Corruption is discussed as if it were something abstract,” said the patriarch. “But we forget that corruption comes from those who are a morally corrupt. Thus, it permeates the institutions, the ministries and the administrations.” To fight it, “it is therefore necessary to fight corruption from within”.

During the week-end, Card Al-Rahi also met a Druze delegation at the patriarchal see in Bkerké that included Sheikh Ghandi Makarem and Sheikh Ghassan al-Halabi, who delivered a message from Druze spiritual leader Sheikh Naim Hassan.

During the meeting, participants stressed again the importance of preserving the nation, strengthening the commitment to dialogue and boosting communication between the various components of society.