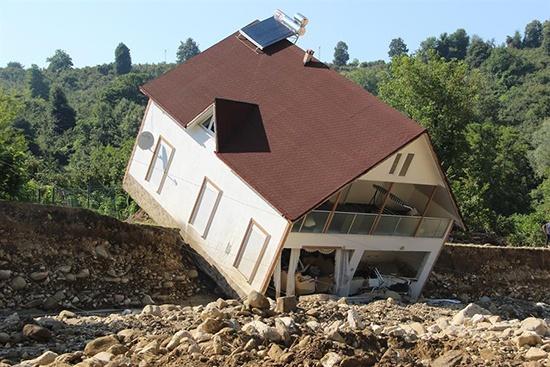 Search and rescue teams have found the bodies of a woman and a child in a northwestern province of Turkey, with efforts to find two more missing people continuing following last week’s flood.

Flash floods hit the Cumayeri, Gölyaka and Akçakoca districts in Düzce after a record amount of rainfall on July 17 and 18 caused floods on the banks of Melen Brook and consecutive landslides.

The bodies of Fatma Töngel, Cengiz Töngel and the seven-year-old Sanem Kaplan were found between July 19 and 22.

With the two other bodies found on July 23, the death toll reached five.

Three search and rescue dogs are contributing to the efforts.

It said 375 buildings were damaged and 100 others were totally demolished due to landslides.

Officials have been visiting the spots where damage is reported to record losses, it added.

A total of 1,687 farmers’ agricultural land has been damaged.

Some 5,562 decares of hazelnut field, 621 decares of corn fields 643 bee hives with 200 of them being empty, 25 fisher boats and two trout farms were also damaged.

Officials have been carrying out disinfection efforts to prevent contamination.

Power generators have been taken to villages where electricity is cut.

The governor’s office warned citizens to avoid using water from unknown sources if the tap water is cut or is cloudy due to the flood.

They should rather let the tap water flow until the color looks clear and boil the water for a few minutes before using when possible, the July 22 statement read.

They should also keep water stored in clean and closed containers, it said.