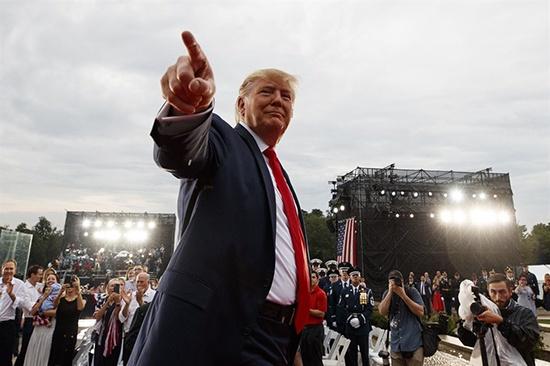 “I have an Article II, where I have to the right to do whatever I want as president,” Donald Trump said

President Donald Trump believes the Constitution gives him a wide breadth of power. That’s the message he delivered – not for the first time – on Tuesday while addressing a crowd of teenagers and young adults at the Turning Point USA Teen Student Action Summit in Washington.

Numerous viral videos show clips from Trump’s 80-minute speech at the conference, and one of the most controversial moments came as he discussed Article II of the Constitution, which describes the powers of the president.

Trump lamented the duration and cost of the investigation of Russian interference in the 2016 presidential election led by special counsel Robert Mueller, which he has repeatedly said found “no collusion, no obstruction.”

“Then, I have an Article II, where I have to the right to do whatever I want as president,” he said. “But, I don’t even talk about that.”

Political pundits flooded social media with that clip, though most of the videos didn’t include the Mueller-probe context. Trump in his Tuesday speech also attacked four minority Democratic congresswomen who call themselves “the Squad” and falsely claimed Democrats saw wins in the 2018 elections because undocumented immigrants voted “many times – not just twice.”

Article II grants the president “executive power.” It does not indicate that the president has total power. Article II is the same part of the Constitution that describes some of Congress’s oversight responsibilities, including over the office of the presidency. It also details how the president may be removed from office via impeachment.

Trump’s remarks come as Democratic lawmakers are facing mounting pressure from the left to launch impeachment hearings on the president. Republicans and the majority of House Democrats voted down an impeachment resolution against the president last week.

Speaking to ABC in June about allegations that Trump wanted to fire Mueller, the president said: “Article II allows me to do whatever I want. Article II would have allowed me to fire him.”

Earlier this month, Trump again mentioned “a thing called Article II” as he spoke to reporters about Mueller’s collusion and obstruction findings.

“Nobody ever mentions Article II,” he said. “It gives me all of these rights at a level nobody has ever seen before. We don’t even talk about Article II.”