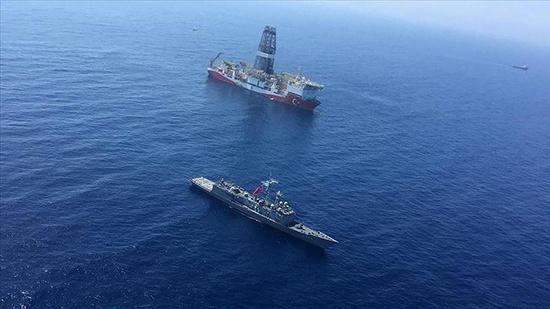 Turkey has been advancing its navy buildup in the eastern Mediterranean as Turkish drilling vessels have been operating in the company of Naval Forces Command elements.

The Naval Forces Command is providing full protection to the drilling vessels, both on the surface and underwater, with the help of unmanned aerial vehicles (UAVs), the National Defense Ministry said in a tweet on July 23.

“Our Naval Forces Command is continuously and incessantly accompanying our drillingvessels in the eastern Mediterranean,” the ministry tweeted, with video footage of the vessels, shot by a UAV.

The vessels are being protected by air with the Bayraktar TB-2 UAV, a maritime patrol aircraft and naval helicopters. Some corvettes, frigates and assault boats are providing protection on the surface, the ministry conveyed.

Furthermore, submarines are also escorting the drilling vessels by guarding them underwater, the ministry’s tweet added.

The video’s release comes against a backdrop of Turkey asserting its own rights and the rights of Turkish Cyprus to search for natural resources in the eastern Mediterranean in the face of European intransigence and challenges, including threats to arrest the crews of Turkish drillships.

Turkey has consistently contested the Greek Cypriot administration’s unilateral drilling in the eastern Mediterranean, asserting that the Turkish Republic of Northern Cyprus (TRNC) also has rights to the resources in the area.

Since this spring, Ankara has sent two drilling vessels — Fatih and most recently Yavuz — to the eastern Mediterranean, asserting the right of Turkey and the TRNC to the resources of the region.

Turkey’s first seismic vessel, the Barbaros Hayrettin Paşa, bought from Norway in 2013, has been conducting exploration in the Mediterranean since April 2017.

Athens and Greek Cypriots have opposed the move, threatening to arrest the ships’ crews and enlisting EU leaders to join their criticism.

In 1974, following a coup aiming at Cyprus’s annexation by Greece, Ankara had to intervene as a guarantor power. In 1983, the TRNC was founded.

The decades since have seen several attempts to resolve the Cyprus dispute, all ending in failure. The latest one, held with the participation of the guarantor countries — Turkey, Greece, and the United Kingdom — ended in 2017 in Switzerland. Fifteen diplomats confessed to FETÖ irregularities in foreign ministry entrance exam investigation.