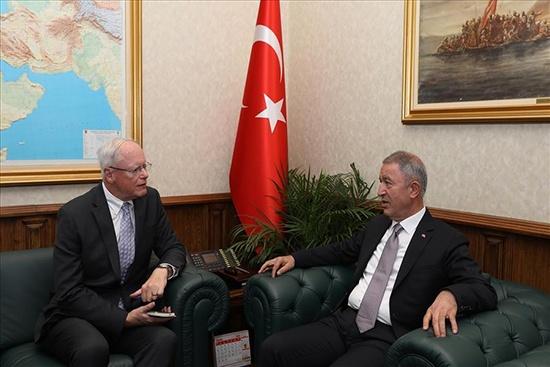 Military officials from Turkey and the United States have kicked off talks at the Turkish Defense Ministry on July 23 on the issue of establishing a safe zone in northern Syria.

After welcoming James Jeffrey, U.S. envoy for Syria, who arrived in the Turkish capital Ankara for a two-day visit, Defense Minister Hulusi Akar said the planned safe zone east of the Euphrates River should be established jointly by Turkey and the U.S. in a coordinated manner, according to a Ministry statement.

“On the presence of the terrorist groups PKK/YPG and Daesh,” Akar said their fortifications should be destroyed and heavy weapons collected, using the Arabic acronym for the ISIL.

Ankara believes the YPG is the Syria branch of the illegal PKK, which is listed as a terrorist organization by Turkey, the U.S. and the EU. Ankara wants the YPG to withdraw from the border area in the planned safe zone, while Washington wants guarantees that Kurdish Syrians, whom the United States allied within the campaign to defeat ISIL in Syria, will not be harmed.

Akar reiterated that “Turkey’s fight in the region is not against a specific ethno-religious group like Kurds or Arabs but against terrorists of the PKK/YPG and ISIL, and the conditions for Syrian refugees’ return must be created.”

Last week, Akar told acting U.S. Defense Secretary Mark Esper: “The only military force that is ready, competent, and appropriate for the establishment of a safe zone in northern Syria is the Turkish Armed Forces.”

Turkey has been in talks with the United States over the establishment of a safe zone across its border in northeast Syria.

In an interview with broadcaster TGRT Haber, Foreign Minister Mevlüt Çavuşoğlu said he hoped an agreement would be reached after talks later on July 22 with Jeffrey.

After the meeting, a decision is taken to keep up talks in Ankara on the level of generals.

“If the safe zone is not established and threats towards our country continue, we will launch the operation in the east of the Euphrates,” he told TGRT Haber.  “The Americans sent Jeffrey and said there were new proposals in the talks that will start today. We hope an agreement can be reached on this. Concrete steps are needed on this now,” he said.

Turkey wants to have full control of the safe zone after all the YPG troops are withdrawn and all their facilities are destroyed. The depth of the safe zone should be around 30-40 kilometers so that no YPG troops can attack the Turkish border, Ankara says. The U.S., however, earlier insisted on an around 10 kilometer-deep safe zone with no permanent deployment of Turkish troops.

Since 2016, Turkey has conducted two major military operations in northwestern Syria – Operations Euphrates Shield and Olive Branch- to purge the region of what it considers terrorist groups, most notably the YPG. Turkey recently advanced its military build-up in its border with Syria.