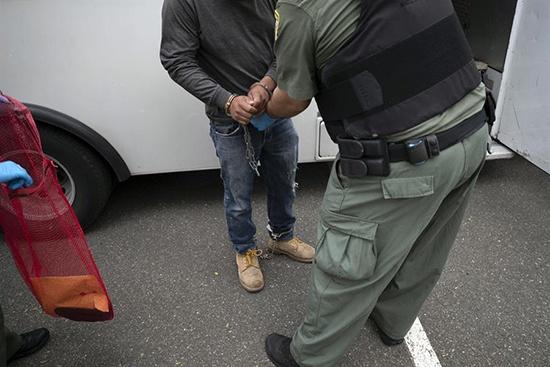 The Trump administration said on July 22 it will expand and speed up deportations of migrants who enter the United States illegally by stripping away court oversight, enabling officials to remove people in days rather than months or years.

Set to be published in the Federal Register on July 23, the rule will apply “expedited removal” to the majority of those who enter the United States illegally, unless they can prove they have been living in the country for at least two years.

Legal experts said it was a dramatic expansion of a program already used along the U.S.-Mexican border that cuts out review by an immigration judge, usually without access to an attorney. Both are available in regular proceedings.

“The Trump administration is moving forward into converting ICE (Immigrations and Customs Enforcement) into a ‘show me your papers’ army,” said Vanita Gupta, the president of The Leadership Conference on Civil and Human Rights, on a call with reporters.

It was likely the policy would be blocked quickly by a court, several experts said. The American Civil Liberties Union, which has filed suit to block numerous Trump immigration policies in court, has vowed to sue.

President Donald Trump has struggled to stem an increase of mostly Central American families arriving at the U.S.-Mexico border, leading to overcrowded detention facilities and a political battle over a growing humanitarian crisis.

The government said increasing rapid deportations would free up detention space and ease strains on immigration courts, which face a backlog of more than 900,000 cases.

Nearly 300,000 of the approximately 11 million immigrants in the United States illegally could be quickly deported under the new rule, according to the nonpartisan Migration Policy Institute.

The Department of Homeland Security (DHS) said 37%, or 20,570, of those encountered by ICE in the year to September had been in the country less than two years.

People in rapid deportation proceedings are detained for 11.4 days on average, according to DHS. People in regular proceedings are held for 51.5 days and are released into the United States for the months or years it takes to resolve their cases.