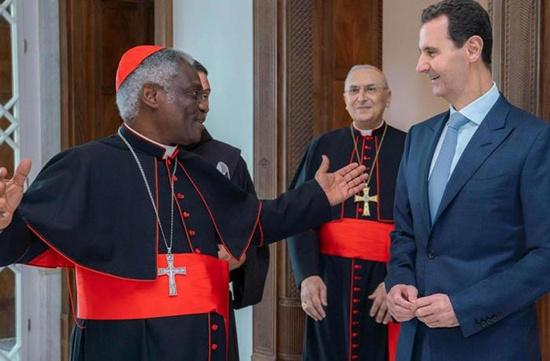 AsiaNews source speaks of controversy and poor understanding around the letter addressed by the pontiff to the Syrian leader. Among the ranks of loyalists, “criticism” and “misunderstanding” prevail. Applause and appreciation of the opposition. Meanwhile, violence and attacks continue in Idlib, Hama and Aleppo with deaths and material damage.

Damascus (AsiaNews) – A “courageous enough” letter that has sparked controversy and debate in Syria: on the one hand, the general “appreciation” among the ranks of oppositions fighting against the leadership of Damascus; on the other, the “criticisms” in a low voice and the “misunderstandings” raised among loyalists loyal to Bashar al-Assad.

Pope Francis’ letter to the Syrian president, asking him to “protect the lives of civilians” and “preserve the main infrastructures” of the country, continues to echo days after its delivery.

Ecclesiastical sources of AsiaNews in the capital, following anonymity given the extreme delicacy of the issue, speak of a dual and contrasting sentiment around the letter sent by the pope to Assad. In general, the opinion of a “courageous enough letter” prevails which recalls the most important elements that have revolved around the conflict for years.

However, the source explains, the text “was not well understood in all its aspects among the ranks of the loyalists”, who read criticism of the Syrian president’s actions, particularly in recent months around the rebel stronghold of Idlib in the pontiff’s words. The government wants to recapture the last pocket of the country still in the hands of anti-Assad groups supported by Turkey and by jihadist groups, which use the outpost to launch new attacks.

The most recent have taken place this week against Aleppo, with the death of several civilians and substantial material damage. “Last night – underlines the source – there were attacks by the Israeli army around Damascus” and in the south of the country. At the same time, there are “active outbreaks of violence in Idlib, Hama and Aleppo, although certain information is lacking” and the fear of escalation remains high.

Even among the ranks of the same Syrian Church there is discontent and  voices critical of the Pope. In the letter – delivered by Card. Peter Turkson, prefect of the Dicastery for integral human development, accompanied by the nuncio Card. Mario Zenari – Francis expresses “profound concern for the humanitarian situation,” with particular reference to Idlib. He uses the word “reconciliation” three times, with a view to safeguarding the country and the “defenseless population” and encourages Assad to “significant gestures” towards peace, security and the return of exiles.

These words, continues the source of AsiaNews, “have been applauded by the opposition” [moreover, a fragmented and variegated galaxy, with profound differences within it and this is one of the reasons that hinder dialogue with the Syrian government in a perspective of peace ]. Anti-Assad groups seem to have found support in their criticism of the Syrian leader, considered the main obstacle to a path of reconciliation.

The opinion of activists and bloggers critical of foreign interference is different, including Syriana Analysis which has been active for a long time on social media to denounce violence and attacks against the population. The independent platform was launched in 2017 and is made up of independent journalists and intellectuals. There was no lack of criticism of the Pope’s letter in posts, which claimed that “instead of thanking Assad for the fight against Wahhabi terrorism” that “targets Christians in Syria and Iraq” asks for “an end to the catastrophe in Idlib”. Forgetting, however, the post concludes, to “blame Ankara, Brussels and Washington for their support for extremism”.