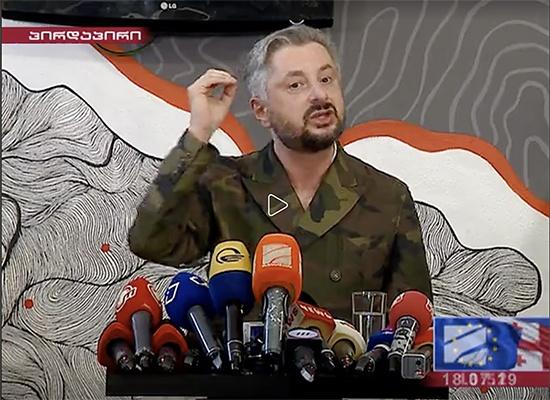 The TV news network at the center of the struggle, Rustavi2, has played an outsized role in the country’s recent history.

A showdown looming between journalists at Georgia’s top television news network and its new owners could have far-reaching consequences. The station, Rustavi2, is more than just a TV network, but a key player in modern Georgian history.

Following a European court ruling on July 18, Rustavi2 – which offers a strongly opposition take on Georgian politics – was transferred to an owner friendly with the ruling Georgian Dream party. Media observer Lasha Kavtaradze quipped that Georgian Dream, which has governed since 2012, has “only now come to power.” The joke was that the station is so influential that it stands on par with the executive, judiciary and legislature as a key branch of power, but which until now has been the only one not under the ruling party’s control.

Rustavi2 is the most-watched network in a nation of voracious TV viewers – over 70 percent of Georgians get their news primarily from television. And love it or hate it, Rustavi2 has been, on and off, Georgia’s main political entertainment for almost three decades. It is “the main show in town,” said Nino Japiashvili, managing director for the Georgian bureau of RFE/RL.

“For a very long time, everyone found out what was really going on in the country by tuning in to Kurieri,” the network’s main nightly news bulletin, Japiashvili told Eurasianet. Government officials “constantly lashed out at Rustavi2, but they would not start press conferences until Rustavi2’s mic was fixed in front of them.”

In recent years, Rustavi2 has been essentially at war with Bidzina Ivanishvili, the head of Georgian Dream and the richest and most powerful man in Georgia. Nika Gvaramia, the general director of the station until last week, would deliver fiery speeches at anti-government rallies and would use airtime to broadcast crude epithets for Ivanishvili. Ivanishvili, in turn, once famously said that “if you switch off Rustavi2 today, you will see nothing but progress and renaissance in the country.”

While it was widely criticized for favoring the political opposition and its often vitriolic, muckraking style, Rustavi2 also has effectively acted as a powerful check on Ivanishvili and his party’s otherwise dominant hold over the nation. The channel has regularly pushed the government to respond to pressing issues and senior government officials have engaged in bitter, but informative debates with Rustavi2 journalists. These exchanges have shaped much of the national conversation since Georgian Dream came to power.

Critics charge that Ivanishvili has now finally gotten the chance to make sure voters see only the “progress and renaissance” that he wants to show.

The conflict played out live on Rustavi2 on July 18, the day that Kibar Khalvashi, a businessman believed to be connected to the ruling party, prevailed in a years-long legal battle for the station. Khalvashi immediately fired Gvaramia and appointed his attorney, Paata Salia, to replace him.

“I have no business to do with you. I will instruct my secretary not to even make you coffee,” Gvaramia told Salia when the new director came to visit the newsroom and the station broadcast it live. “You’ve come here to bury democracy in this country,” Gvaramia went on. He accused the new owner and his representative of fronting for Georgian Dream and Ivanishvili. “We will be fine and we will see this country become a Western democracy,” Salia responded.

Under its recent ownership, Rustavi2 has had a stated mission to promote Georgia’s Western integration, push for membership in the European Union and NATO, and to battle those whom it sees as standing in the way. Gvaramia has claimed that Ivanishvili’s secret agenda is to pull Georgia back into Russia’s orbit, and he has portrayed the station’s takeover as a part of that plan. “You helped those who kicked you out from you home in Abkhazia,” Gvaramia told Salia during their July 18 altercation; both men are exiles from the Russia-backed breakaway territory.

The station was founded in 1994 and was originally based in Rustavi, a small industrial city just outside Tbilisi. With the help of American media trainers, the network broke free of the Soviet-style, slow-paced format then still prevalent in Georgia and offered instead hard news and investigative reporting delivered in a modern, compelling style.

Eduard Shevardnadze was first Georgian leader to attempt muzzle Rustavi2, which mocked and criticized his corrupt government through its reporting as well as a satirical cartoon show. But Rustavi2 eventually played a key role in Shevardnadze’s downfall, as its reporting helped precipitate the 2003 Rose Revolution. The channel made no secret of its role in the revolution and even adopted the tagline “The Victorious People’s Television.”

Having a first-hand appreciation of Rustavi2’s power, Rose Revolution hero and Shevardnadze successor Mikheil Saakashvili managed to co-opt Rustavi2 by choreographing the station’s handover in 2004 to a man that media observers say was a hand-picked loyalist, businessman Khalvashi. “Saakashvili tasked [ex-defense minister] Irakli Okruashvili to arrange the sale and Okruashvili brought in his friend Khalvashi,” Zviad Koridze, a veteran journalist and media analyst, told Eurasianet.

Rustavi2 subsequently evolved into a government mouthpiece, prompting many of its top journalists to quit in protest.

But then the station’s leaders and Saakashvili fell out. Saakashvili and Okruashvili bitterly quarreled in 2006 and it was then that Khalvashi claims he was pressured by the authorities to sell the network. From 2006 on, the station proceeded through a dizzying series of ownership changes. When Saakashvili was ousted by Ivanishvili in 2012, several of Rustavi2’s many past owners returned to try to reclaim ownership.

Okruashvili now says that Khalvashi bought Rustavi2 with his money. Two of the three original founders, Davit Dvali and Jarji Akimidze, claim the authorities twisted their arms in 2004 to sell the channel and claim that they, not Khalvashi, are the rightful owners, and have accused the new owner of being Ivanishvili’s pawn. “Today, one man stands in the way of restoration of justice, and between us and the television company we founded, and this is not Kibar Khalvashi,” the pair said in a July 23 statement.

Koridze, the media observer, said it is widely believed that it was in fact Ivanishvili who originally gave Saakashvili the cash to buy Rustavi2; the two men were allies and Ivanishvili sponsored many of Saakashvili’s projects until falling out into the epic feud that continues to shape Georgia’s political landscape.

“Rustavi2 in fact belongs to two people, Mikheil Saakashvili and Bidzina Ivanishvili, but neither of them can admit to it,” Koridze said.

Gvaramia, the recently ousted station director, is a friend and ally of Saakashvili, having served as a minister in his government. Under Gvaramia the station remained a stronghold of Saakashvili loyalists and continues to give regular airtime to the former president.

In spite of the station’s clear political bias, some media watchdogs argue that the bigger danger now is the prospect that the government could be conniving to shut down a key source of criticism. “Rustavi2 plays a significant role in monitoring the government and keeping it accountable,” said some of Georgia’s prominent democracy watchdogs, including Transparency International and the Georgian Young Lawyers Association, in a collective statement.

After he succeeded in taking back control this month, Khalvashi quickly vowed not to interfere with the work of Rustavi2’s newsroom, but later added that “editorial freedom does not mean humoring the whims and caprices of people with destructive agendas.” Noting that “destructive” has been the government’s go-to epithet for Rustavi2, its journalists are bracing for a fight and say they intend to resist censorship.

“The Georgian public has seen many episodes of different governments’ occupying television companies,” said Rustavi2 news executive Nodar Meladze in a July 22 meeting with foreign diplomats in Tbilisi. “Now you will see the first episode of a TV staff defending editorial freedom against such an occupation and not letting its broadcasts be reduced to fluttering butterflies.”